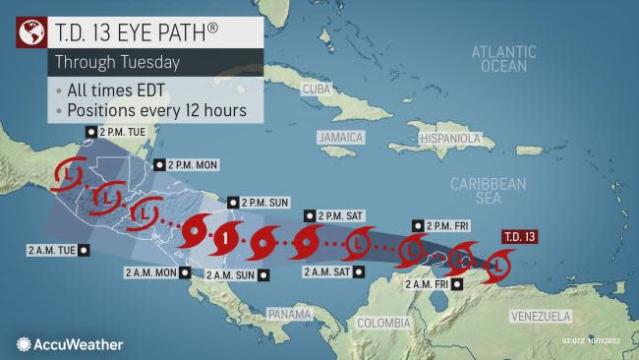 A tropical storm is forecast to develop in the south-central Caribbean Sea this weekend and strengthen into a hurricane prior to crashing into Central America, AccuWeather meteorologists say.

The disturbance that could eventually become the next named storm system in the Atlantic basin has had a history of producing torrential rain and flooding downpours in the islands of the southern Caribbean this week and is far from its peak intensity because it is still close to South America. This has made it harder for the system to organize.

However, as the system gradually moves away from land and over the warm waters of the Caribbean, it will encounter environmental factors that will allow it to become better organized and gather strength. The National Hurricane Center (NHC) designated the storm as Potential Tropical Cyclone 13 Thursday. Late on Thursday evening, the NHC determined that the potential tropical cyclone had developed a spin. Therefore, the system was upgraded to Tropical Depression 13.

On Thursday afternoon, the government of Colombia issued a hurricane watch for San Andres Providencia and the Santa Catalina Islands. A tropical storm warning was in effect for the coast of Colombia from Riohacha to the Venezuela border.

Torrential downpours triggered flash floods in the Windward Islands of Trinidad and Tobago Wednesday. As downpours continued in parts of the southern Windward Islands Thursday, torrential rain was being unleashed in the islands of Aruba, Bonaire and Curacao, as well as part of northern Venezuela as the system continued to move westward.

At Least 80 People Dead Amid Disastrous Floods in Nigeria