DID the POPE MAKE a 15-YEAR-OLD GIRL, by the NAME OF EMANUELA ORLANDI, DISAPPEAR WHO SOME BELIEVE WAS BEING USED as a SEX SLAVE in the VATICAN? DID THE POPE MAKE HER DISAPPEAR THROUGH the MAFIA or SOME OTHER WAY?

BCNN1.COM Editors say, Understand, People, There Are People Who Can Make You Disappear and You Not be Dead. Think it not strange. This has not only happened with the popes and the Vatican and the Catholic church around the world. But it has also happened in Charismatic prosperity Gospel churches and even some Baptist churches. We believe there are people living today who know of pastors who have made a side-piece disappear and or pastors who made their wife disappear for insurance money and justified it by paying off some of the church bills. We believe there are some people today who know of a few pastors who took a large sum of money and made themselves disappear, but they are still alive. And we wonder, are there a few WOKE pastors, a few WOKE Gospel singers, and a few WOKE pastors’ wives who are contemplating making a prophet’s daughter disappear because she told him the truth about something and because she cannot bring herself to be a one hundred percent Judas and betray her father like they have tried to brainwash her to do?

There are few conspiracy theories that captivate conspiratorial Italians as much as the disappearance of 15-year-old Emanuela Orlandi, the daughter of a Vatican employee who vanished outside an Opus Dei church in 1983. Prime suspects? The KGB, the Italian mafia, the Russian mafia, Turkish terrorists, to name a few. But as Vatican Girl, a new Netflix docuseries on the case points out, “There are grains of truth in each theory, but all the roads lead to the Vatican.”

The Daily Beast previewed—OK, binged—the four-part series ahead of its release Thursday, and no documentary to date cuts as close to the bone in the nearly 40-year-old cold case. Tombs have been unearthed, gangsters’ lovers have been interviewed, and international terrorist plots parsed in trying to understand if Orlandi is alive, and, if not, who killed her and why.

Director Mark Lewis unveils a number of new pieces to the puzzle, including the rarely mentioned fact that Orlandi disappeared the day Pope John Paul II was in Poland addressing hordes of Solidarity followers (who were rumored to have been funded by Vatican money with ties to the mafia). He also introduces a new witness who claims that Orlandi, who lived inside the Vatican fortress, was sexually assaulted by a cardinal and that the secret was used to blackmail the church. Lewis told The Daily Beast that sifting through a story with so many leads meant taking some distance. “Crime stories like this have layers of journalism that get laid down like leaves,” he said. “The story has a succession of theories, a succession of clues to work through.”

The series is equal parts a love letter to Rome, with photography that at times looks like a Rome tourism campaign, and an old-school documentary, with grainy never-before-seen footage from the Orlandi family archive that brings the missing girl to life. The project was aided by the fact that much of it was shot during Italy’s COVID-19 lockdowns, which meant Lewis and his crew could shoot an empty Rome after curfews. He also stumbled upon the Orlandi footage after he asked about a bag of old film reels under Pietro Orlandi’s desk he just happened to notice, which provided an unprecedented portrait of the family before their beloved daughter and sister disappeared. 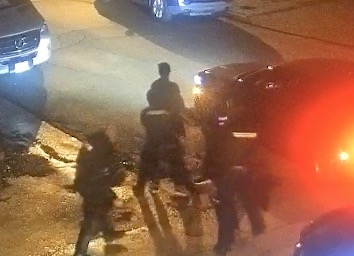 5 THOUGHTS ON THE FIVE POLICE OFFICERS BEATING TYRE NICHOLS ON JANUARY 7th, 2023, FROM THE EDITORS OF BLACKCHRISTIANNEWS.COM (BCNN1.COM)