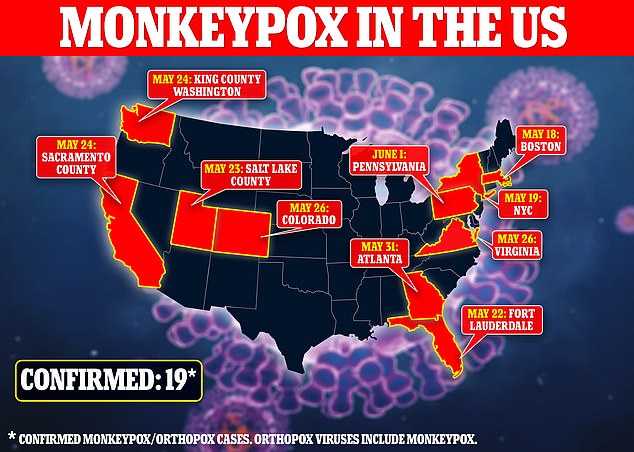 Chicago has detected a suspected case of monkeypox in a man who recently returned from Europe, health chiefs revealed Thursday.

The patient — who was not named — is the first case to be detected in Illinois since the outbreak began last month.

It brings the U.S. tally to 21 cases across as many as 11 states, with Los Angeles today also reporting its first suspected case in an adult ‘close contact’ of another case.

Health chiefs in Pennsylvania also revealed their first case in Philadelphia, but refused to reveal any further details to ‘protect the resident’s privacy’.

Each department insisted that the risk of the virus spreading to others in the state was ‘very low’, but contact tracing is underway.

Most infections in the U.S., however, have been detected among gay and bisexual men who had recently returned from abroad.

It is the latest in a global outbreak with more than 500 cases of the tropical disease spotted in two dozen countries outside of West Africa — where it is native.

World Health Organization chiefs are calling on people to limit their number of sexual contacts to stop the virus transmitting.