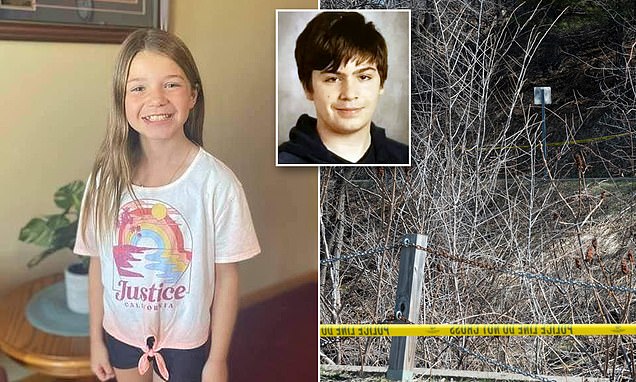 Murdered 10-year-old Lily Peters (right) died after she was strangled and suffered blunt force trauma, her autopsy showed. The girl’s remains were found in woodland near Chippewa Falls, northeast of Eau Claire, Wisconsin on April 25, after she went missing during a bike ride the day before. Preliminary autopsy results confirmed Lily died of strangulation and blunt force trauma, Chippewa County Coroner Ronald Patten said Thursday. He added the autopsy on Lily showed the manner of death was homicide and said he expected the results of toxicology tests, which will include DNA samples and more evidence on her alleged rape, within four to six weeks. Lily’s cousin, Carson Peters-Berger, 14, (inset) was arrested on suspicion of murdering and raping the 10-year-old fourth-grader and was held on a $1million cash bond. Peters-Berger is facing a possible life sentence after being charged with three counts over Lily’s death: first-degree intentional homicide, first-degree sexual assault and first-degree sexual assault of a child.

Official Autopsy Reveals Patrick Lyoya’s Blood-Alcohol Level Was Three Times the Legal Limit When He Was Pulled Over and Fatally Shot in the Back...