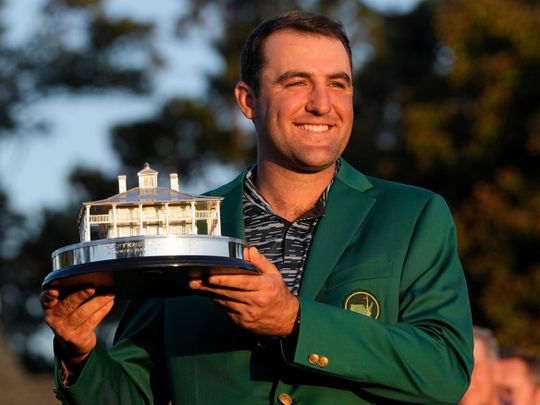 Scottie Scheffler looked like a Masters champion even before he slipped into his green jacket, the model of calm as he methodically worked his way around the most stressful course in major championship golf.

Sunday morning was different. That turned out to be the toughest test he had all day.

“I cried like a baby this morning. I was so stressed out. I didn’t know what to do,” Scheffler said after winning his first major. “I was sitting there telling [wife] Meredith, ‘I don’t think I’m ready for this’ … and I just felt overwhelmed.”

And then he capped off his torrid two-month stretch with his grandest feat of all, leading the entire weekend and strolling to a 1-under 71 — with one lapse in concentration at the end when it didn’t matter — for a 3-shot victory over Rory McIlroy.

For a guy who had won three of his previous five tournaments, who reached No. 1 in the world, why suddenly be overcome with doubt?

“I think because it’s the Masters. I dreamed of having a chance to play in this golf tournament. I teared up the first time I got my invitation in the mail,” Scheffler said.

“If you’re going to choose a golf tournament to win, this would be the tournament,” he said. “You don’t know how many chances you’re going to get. And so having a chance — I had a 5-shot lead on Friday and then a 3-shot lead going into today — I don’t know if you get better opportunities than that. You don’t want to waste them.”

He felt at peace between the ropes and never allowed himself to enjoy the moment until he took that famous walk up the 18th green, his ball 40 feet away and a 5-shot lead in hand.

“And you saw the results of that,” he said with a laugh at his four-putt double bogey that affected only the margin of victory.