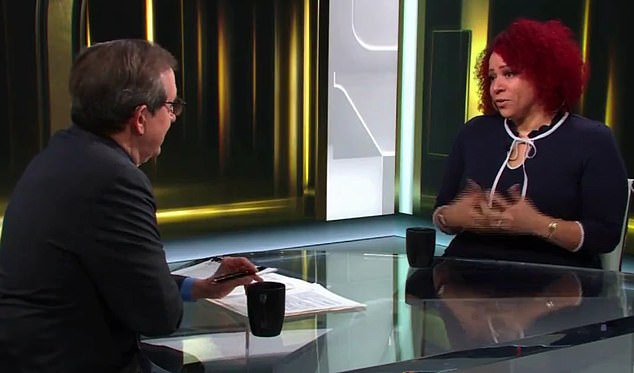 New CNN hire Chris Wallace pushed back against claims by Nikole Hannah-Jones that the generation of Americans that fought in World War II were guilty of ‘brutally suppressing democracy’ for black Americans during a ‘heated’ interview with the firebrand author of the 1619 Project.

Wallace interviewed Hannah-Jones for his new series on CNN’s streaming service on Wednesday night, and while the discussion was civil he admitted that it got ‘a little heated’ at times.

During the interview on CNN+, Wallace read Hannah-Jones a passage from her Pulitzer-winning New York Times series, which aimed to ‘reframe the country’s history’ to focus on the consequences of slavery.

The passage read: ‘Without the idealistic strenuous and patriotic efforts of black Americans, our democracy today would most likely look very different. It might not be a democracy at all.’

‘We like to call those who lived during World War Two, the Greatest Generation, but that allows us to ignore the fact that many of this generation fought for democracy abroad, while brutally suppressing democracy for millions of American citizens.’

Wallace asked the author: ‘Again, I am in no way minimizing our terrible racial legacy. But in some of these things, aren’t you overstating?’

Georgia Democratic Nominee for Governor Stacey Abrams on How She Became Pro-Abortion Despite Being Raised in a Religious Household That Was ‘Very Much on...