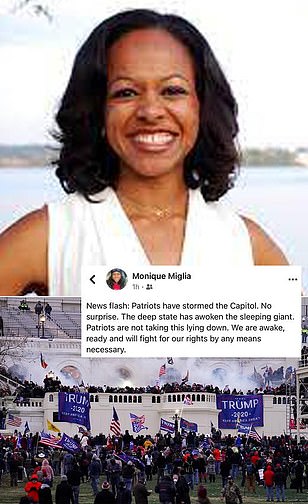 A deputy attorney general for the state of Virginia resigned Thursday following questions raised by The Washington Post over her social media presence, including declarations she’d made on Facebook that Donald Trump won the 2020 presidential election. Monique Miles, who oversaw election issues for the Virginia attorney general’s office, also commended the “patriots” who attacked the Capitol on Jan. 6, 2021, according to screenshots captured by the Post. “News Flash: Patriots have stormed the Capitol. No surprise. The deep state has awoken the sleeping giant,” Miles allegedly wrote in one post. She later edited the post to level the blame for the insurrection at “antifa dressed as Patriots.” In other posts around that time, she openly claimed that Trump had won the election. “These left wing violent loonies better realize that DJT is getting a second term,” she wrote. Miles also espoused baseless conspiracy theories related to foreign election inference and voter fraud. The veracity of her remarks were confirmed to the Post by four people who interacted with her on Facebook. In an email to the newspaper following her resignation, Miles called the Post’s work a “character assassination to stir up controversy,” adding that “some liberals have their daggers out for Black conservative females.”