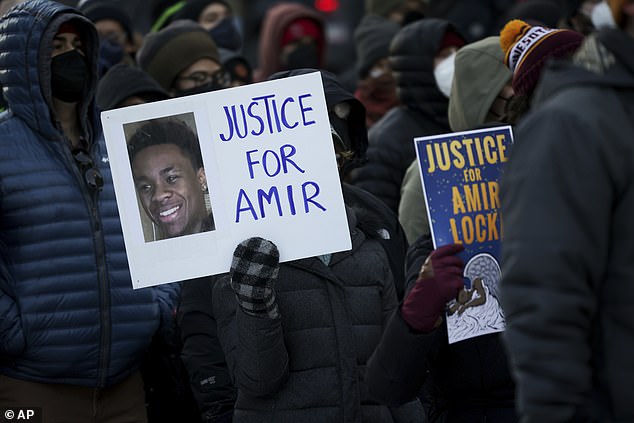 Hundreds of people filled the streets of downtown Minneapolis on Saturday to demand justice for Amir Locke, after body cam footage released by the Minneapolis Police Department showed an officer shoot and kill Locke during a no-knock warrant earlier this week.

More than 1,000 protesters, who gathered outside the Hennepin County Government Center around 3 p.m., also called for the resignation of Minneapolis Mayor Jacob Frey and officer Mark Hanneman.

Hanneman, who was named in public records as the officer who shot Locke, was hired by the department in 2015.

‘No officer goes into a dangerous setting like this wanting to use a weapon,’ the Police Officers Federation of Minneapolis said in a statement Saturday. ‘That decision was not taken lightly, and the impact of the use of deadly force will affect these officers, their families, and the family of Mr. Locke for the rest of their lives.’

The National Association for the Advancement of Colored People said the police’s practices called for the immediate termination of Hanneman.

‘A life was taken, which demands transparency, but perhaps more importantly, accountability,’ the association said Saturday.

On Friday, the National Guard was activated in the state of Minnesota in order to help the Twin Cities in case of any civil unrest following the death of Locke in Minneapolis and the ongoing federal trial in St. Paul involving three officers in the George Floyd‘s death.

Locke, 22, was fatally shot by a Minneapolis police officer on Wednesday, as cops executed a no-knock search warrant.

Locke’s father, Andre, spoke to a crowd Saturday, ‘This is not easy, to have to bury your son,’ according to video posted to Twitter.

He said Locke’s mother was ‘so overwhelmed with grief, disbelief, sorrow, everything that you could imagine that a mother feels when she loses her baby.’

Protesters also called for Hanneman, the officer who shot Locke, to be prosecuted