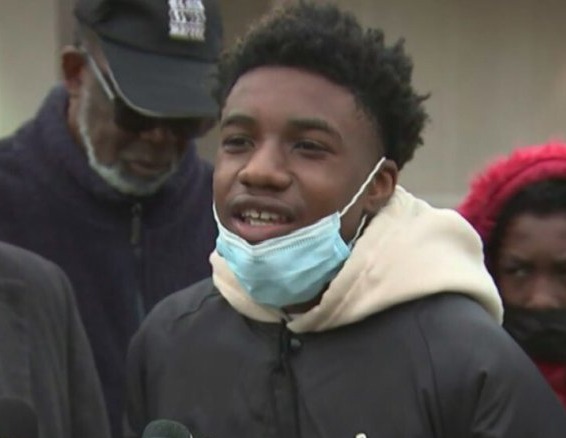 He was wrongly accused of shooting a local Dollar Store employee in the face on Feb. 4. Surveillance photos of the suspect were released by the police department in the immediate aftermath of the shooting.

“The officers said that multiple people came to him and said it was me,” said Martell Williams, the teen wrongly accused of shooting the employee.

The high school freshman, who is also on the basketball team, was confirmed to be at a game in Lincolnshire at the time of the shooting. A time-stamped photograph provided by the family helped to clear him.

But the damage had already been done. Williams was pulled out of class in front of all his classmates.

“The dean came down and got me and walked me to her office. And once I reached her office, there were two police officers,” Williams said. “As soon as I got in, they didn’t tell me nothing, say nothing to me. They just said, ‘You’re under arrest.'”

Flanked by his mother and his attorney this morning, Williams said officers offered him McDonald’s in exchange for a confession. He didn’t know what he was being accused of.