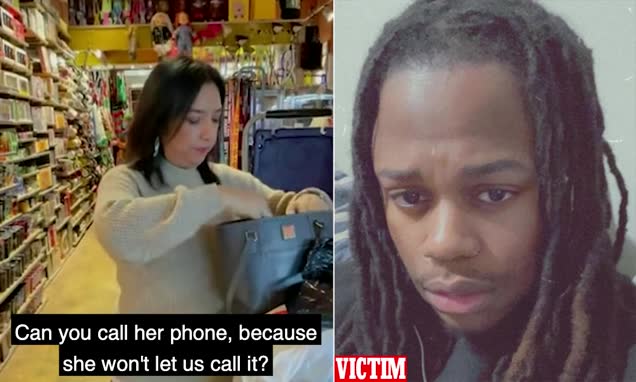 A woman in Sacramento has gone viral after she was caught on camera accusing a black man of having stolen her phone – when it was inside her bag. The unnamed woman confronted Kinsley, who had only moved to California a month ago, and his partner, who filmed the encounter. A shop assistant in the Spencer’s store, in Sunrise Mall, tries to intervene as the woman repeatedly accuses Kinley of theft. The shop assistant suggests calling the phone, but the woman says Kinley could have turned the ringer off. The staff member finally calls the number, and the phone is found inside the woman’s purse. She apologizes, but Kinley and his partner walk off, refusing to accept her apology. The incident comes a year after Miya Ponsetto, 23, accused a 14-year-old boy in a Manhattan hotel lobby of stealing her phone, and attacking him. She had in fact left her phone in an Uber. She has now been charged with hate crimes and faces up to a year in prison.