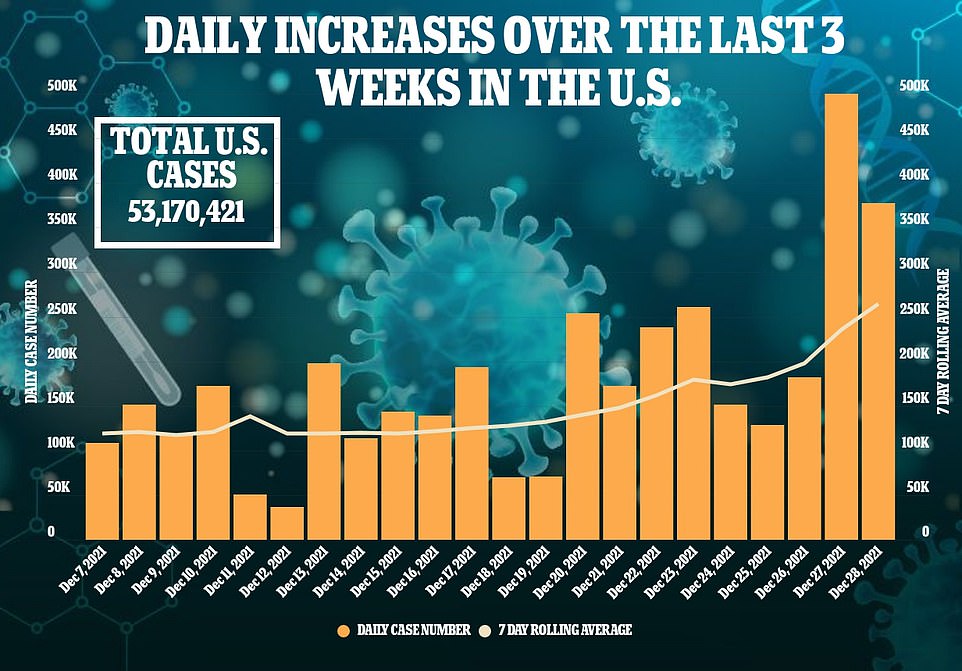 ‘If your plans are to go to a 40 to 50-person New Year’s Eve party with all the bells and whistles and everybody hugging and kissing,’ Fauci said during the White House COVID-19 Response Team briefing, ‘I would strongly recommend that this year, we do not do that.’

He claimed that smaller gatherings with everyone fully vaccinated and boosted against coronavirus is low risk, despite the massive number of breakthrough cases with the Omicron variant’s emergence.

Despite the warnings and massive surges of COVID in New York City, Democratic Mayor Bill de Blasio still plans to ring in 2022 with a 15,000-person strong Times Square ball drop and celebration.

Fauci also said it is ‘conceivable’ that a fourth dose could be recommended to protect against the Omicron variant.

‘Before we start talking about a fourth shot, it would be very important for us to determine the durability of protection, particularly against severe disease for the third shot booster of an mRNA [vaccine] and the second shot of a [Johnson & Johnson],’ Fauci said Wednesday.

He added: ‘It is conceivable that in the future, we might need an additional shot but right now, we are hoping that we will get a greater degree of durability of protection from that booster shot. So we’re going to take one step at a time, get the data from the third boost and then make decisions based on scientific data.’

The nation’s top infectious disease expert had a sobering message about COVID – it likely isn’t ever going away.

‘We’re never going to stop counting, tests – but we’re looking forward, as everyone I think feels is appropriate, that ultimately we’re going to have to live with something that will not be eradicated and very likely would not be eliminated,’ he said.

More than a year after the vaccine was rolled out, new cases of COVID-19 in the U.S. have soared to the highest level on record at more than 265,000 per day on average as the Omicron variant takes hold of the nation.

Despite saying earlier this week that the mask mandates for domestic flight travel ‘should seriously be considered’, he said Wednesday that this provision is not needed.

‘At this particular time, we do not feel that it’s necessary to make that a requirement for domestic flights,’ Fauci said after President Joe Biden told reporters Tuesday that he would consider the provision if his ‘medical team’ advised it.

‘Right now we feel that the masking requirements and the degree of filtration on a plane is sufficient to keep people safe,’ he added.

Even though Omicron is the most contagious variant yet, Fauci agrees with other medical professionals that it is a less severe case of COVID.

‘All indications point to a lesser severity of Omicron versus Delta,’ Fauci said, citing preliminary data.

He added: ‘Final conclusion about the level of severity in children remains to be determined.’