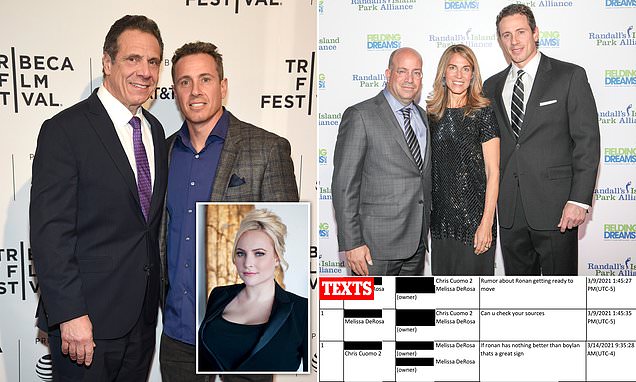 What exactly does Chris Cuomo (left, with brother Andrew Cuomo) have on the President of CNN, Jeff Zucker (right)? At this point, I can’t come up with any other reason why Chris Cuomo has kept his job as a primetime anchor at CNN. For too long Chris Cuomo has been given a pass by the media where others wouldn’t. It is among the worst things that connections to power, fame and a political last name have to offer in this industry. Newly-released transcripts from the investigation into Governor Andrew Cuomo show Chris sending text messages and running interference for Governor Cuomo’s abysmal PR team after his brother was accused of sexual harassment. Chris even asked sources to dig up dirt on his brother’s accusers. This contradicts the lie Chris Cuomo said on air in August when he declared that ‘I never attacked nor encouraged anyone to attack any woman who came forward’. The question I present to CNN and their stockholders is this, in an era where public trust in the media is at historic lows, how can you ethically and in good faith continue to employ a man who is little more than a mouthpiece for his brother and the Democratic party? There is no anchor at CNN, no woman in the media, no one who would be treated the same way Chris Cuomo is being treated. There is no one who could possibly get away with this egregious journalistic malpractice. I for one am absolutely sick of it. Whomever still has a brain or a soul at CNN should fire Chris Cuomo today and Jeffrey Toobin with him. If he isn’t fired, I suggest the media turn their direct focus to CNN President Jeff Zucker and delve deeper into exactly why the president of this network is so hell bent on protecting Chris.

Openly homosexual CNN anchor Don Lemon launches drunken NYE rant at his ‘haters’ during live celebration stream, saying ‘You can kiss my behind’ –...