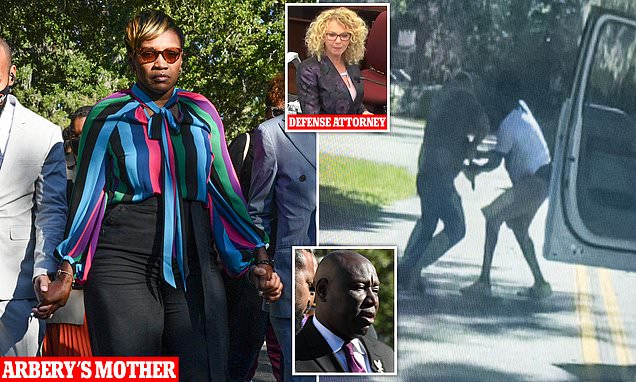 The defense attorney for one of the men on trial for murdering Ahmaud Arbery has been slammed by civil rights lawyer Ben Crump for ‘trying to paint him as a slave’ when she described him as having ‘long, dirty toenails’ and accused him of being a criminal. As the jury in the murder trial deliberates for a second day, civil rights attorney Ben Crump told CNN’s New Day that the defense team for all three men engaged in blatant racism and that they have tried to ‘latch onto a racist rhetoric’ as a way to influence the jury, made up of 11 white and one black juror. ‘She didn’t just paint him as a criminal, let’s be clear about that. What she tried to do was paint him as a runaway slave. And I think what we’re seeing from not only her, other defense attorneys in this case, specifically Gough … we’re seeing an unparalleled level of just blatant racism,’ he said. Travis McMichael, 35, his father, Gregory McMichael, 65, and neighbor William ‘Roddie’ Bryan Jr, 52, have all pleaded not guilty to one count of malice murder, four of felony murder, two of aggravated assault, one of false imprisonment and one of criminal attempt to commit false imprisonment.