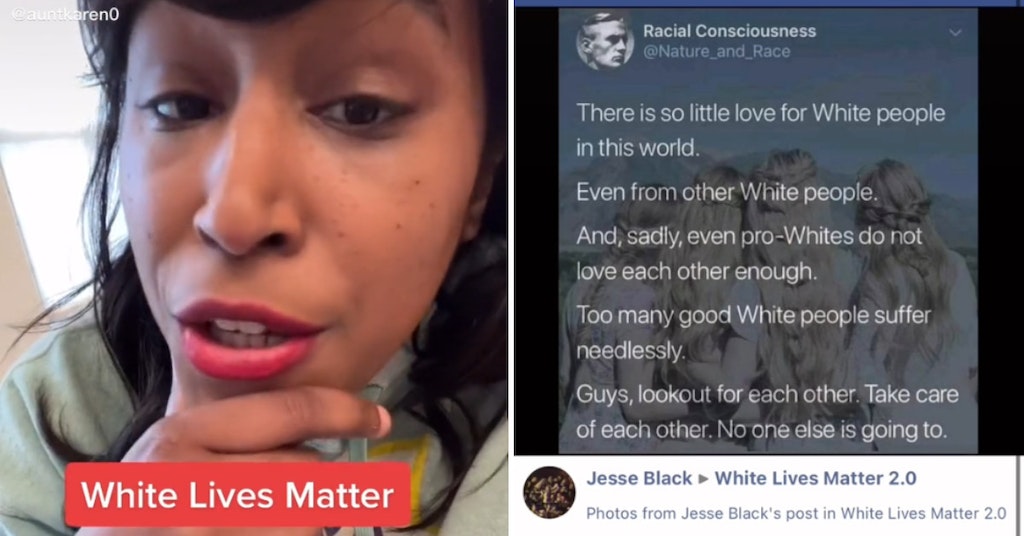 TikToker Denise Bradley who goes by the name of “Aunt Karen” is infiltrating ‘White Lives Matter’ and other white supremacy Facebook groups to expose racist messaging and get them taken down.

In a video posted on October 9th, the influencer explains she joined a Facebook group entitled ‘White Lives Matter 2.0’ and includes several screenshots of photos and comments from the racist group.

Among them was a comment which said, “As soon as I find out info on a company (or anything) that is ‘black only’ I immediately boycott it. It’s pure racism and discrimination.” The video has since garnered over 200,000 views.

Bradley said in another TikTok, “we have to take this group down.”

‘Aunt Karen’s’ TikTok is dedicated to calling out racism.

“The important part is to dismantle the group. My goal is that the public will take notice and Facebook will remove the group as well,” she said to the Daily Dot.

Facebook had removed the group on October 26 due to the violation of community standards. However, there are still several anti-Black racist groups that spew dangerous messaging. Bradley says she is currently in various ‘white lives matter’ groups under different names.

Bradley currently has 1.4 million followers on TikTok and continues to use her platform to identify companies and individuals who engage in discriminatory behavior.