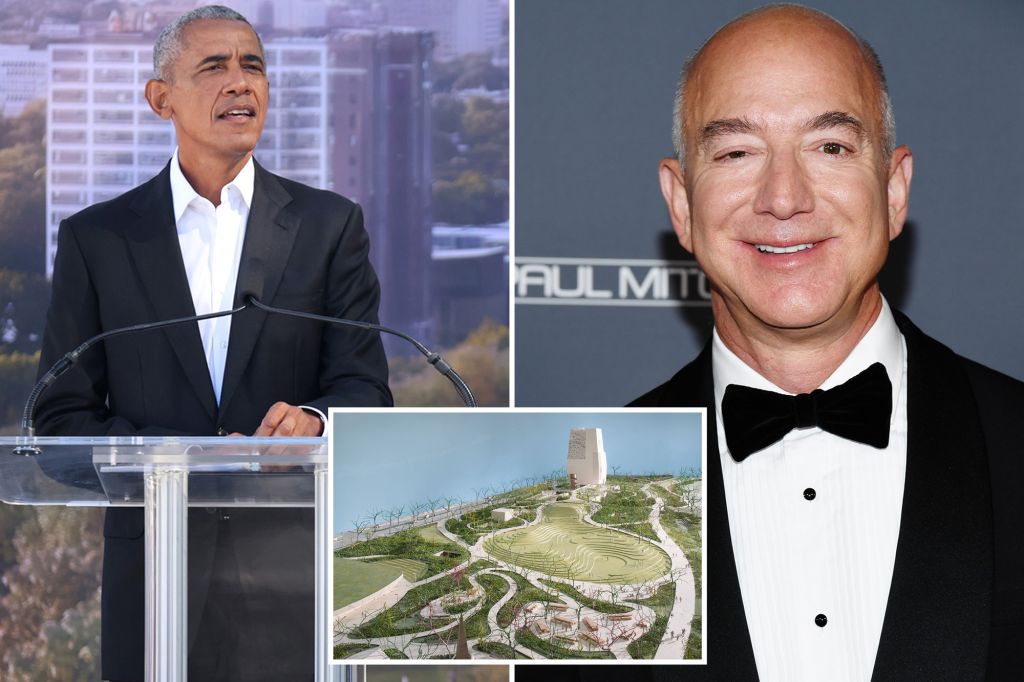 Amazon founder and owner of the Washington Post Jeff Bezos donated a whopping $100 million to the Obama Foundation, the largest ever to the charity.

As part of the gift, Bezos asked the plaza at the Obama Presidential Center be renamed John Lewis Plaza, after the late congressman and civil rights leader who spent decades fighting for voting rights.

Bezos, one of the world’s richest men, has made a series of high-profile donations since stepping down as CEO of Amazon in July, in addition to self-funding his brief jaunt into space on his Blue Origin rocket. Last week, he pledged almost $100 million to groups working to end homelessness.

With Bezos naming the plaza after a civil rights icon rather than himself, the Obama Foundation said it was seeking to ‘change the paradigm around naming public spaces’ after the mega-wealthy donors that funded them.

‘We believe that there is incredible power in lifting up the names of extraordinary change agents upon whose shoulders we all stand, and we are thrilled by Mr. Bezos’ offer to name our magnificent Plaza in honor of John Lewis,’ said Obama Foundation CEO Valerie Jarrett.

‘What’s more, Mr. Bezos’ generous unrestricted gift will enable us to help train a new generation of leaders through programs including the Girls Opportunity Alliance, My Brother’s Keeper, and our Global Leaders Program, while also supporting the Foundation’s Hometown Fund, which invests in the expansion of economic development opportunities for residents of Chicago’s South Side.’

A protege of civil rights icon Martin Luther King Jr., Lewis led sit-ins to integrate all-white lunch counters, was one of the original ‘Freedom Riders’ who integrated buses, and suffered beatings at the hands of white police and mobs. He died in 2020.

‘Freedom fighters deserve a special place in the pantheon of heroes, and I can’t think of a more fitting person to honor with this gift than John Lewis, a great American leader and a man of extraordinary decency and courage,’ Bezos said in a statement.

After years of reviews, other delays and continued local opposition, the Obama Presidential Center broke ground this fall.

The former president in 2016 chose a site in Chicago in Jackson Park, a historic lakefront landmark, to build his presidential library, near where he began his political career, met and married his wife and lived with their family.

The former first lady grew up on Chicago’s South Side.