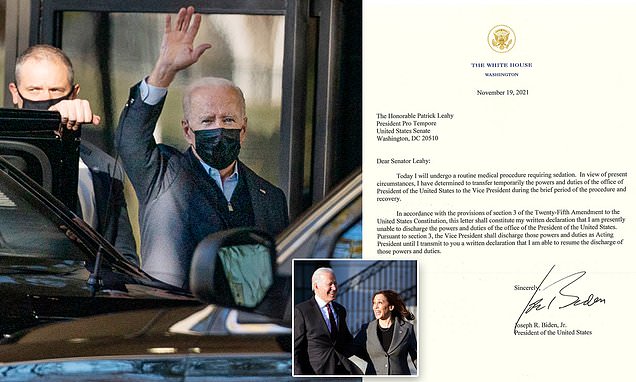 Vice President Kamala Harris was in charge of the country for a brief period on Friday morning when President Joe Biden went under anesthesia for a colonoscopy being conducted as part of his annual physical.

Biden took power back at 11:35 a.m. EDT, after speaking with Harris and White House chief of staff Ron Klain. He reliquished power at 10:10 a.m. EDT, leaving Harris in charge of the country for one hour and 25 minutes.

‘[email protected] spoke with @VP and @WHCOS at approximately 11:35am this morning. @POTUS was in good spirits and at that time resumed his duties. He will remain at Walter Reed as he completes the rest of his routine physical,’ White House press secretary Jen Psaki wrote on Twitter.

The White House said Harris worked out of her office in the West Wing, meaning she was not in the Oval Office as she assumes presidential power. Harris takes over amid reports she is being sidelined by the administration, which the White House has vigorously denied.

Psaki called it ‘another chapter’ in the history Harris’ selection as VP has made. ‘I think that will be noted for many women, young girls across the country,’ she said during her daily press briefing.

President Biden headed to Walter Reed for his physical as the Democrats passed his $1.75 trillion Build Back Better spending bill and days after a poll said American voters were split on whether he is mentally fit and healthy enough to handle the presidency.

The Centers for Disease Control and Prevention recommends regular screenings for colon cancer starting at age 45. A colonoscopy can last about an hour. George W. Bush was the last president to undergo a colonoscopy with anesthesia while in office. And he transferred power to then Vice President Cheney in both 2002 and 2007 when he under went the procedure.