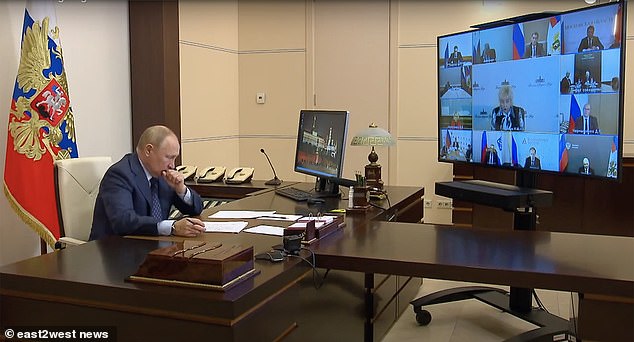 Video showing Vladimir Putin coughing during a meeting with Kremlin ministers has emerged a day after the incident forced him to deny he has Covid-19.

Further fueling speculation, the Russian leader has today pulled out of a G20 conference on Afghanistan.

Putin, 69, tried to play down the health fears and insisted he has high antibody immunity. He blamed a diary clash for missing the G20 meeting.

Politician Valentinna Matviyenko, speaker of the Russian upper house, told him yesterday that colleagues were ‘worried’ about his ‘health’.

‘He has not yet got re-vaccinated,’ admitted his spokesman Dmitry Peskov.

‘He said himself, (he) retains very high… antibodies to coronavirus.’

Putin will ‘follow the recommendations of the doctors’, said the spokesman.

After Putin was seen coughing through Monday’s meeting, he was later challenged about his health by Matviyenko, speaker of the Russian upper house.

‘You were coughing at the meeting – we were all worried,’ she told him. ‘We’re worried about your health.’

He replied: ‘Valentina Ivanovna [Matviyenko], don’t worry, everything is fine.

‘Not only for Covid-19, but all other infections are tested almost daily. So everything is fine.’