Prince Andrew will not return to public life after Charles, Edward and Anne closed the door on him and William branded him a ‘threat to the royal family’, it has been claimed.

Scotland Yard is also reported to have spoken to the Duke of York’s sexual assault accuser Virginia Giuffre over claims she was raped and sexually assaulted by Andrew when she was 17.

The royal has come under intense scrutiny over the claims and over his friendship with paedophile financier Jeffery Epstein.

Andrew, who is not facing any criminal charges, ‘categorically’ denies Ms Giuffre’s claims against him and is thought to be keen to make a return as a working royal.

However, according to sources close to him, Prince William sees his uncle as a threat to the Royal Family and doesn’t intend to let him return to public life.

The 39-year-old, who is second in line to the throne, is said to have been involved in crisis talks with his grandmother and father – The Queen and Prince Charles – over the decision to suspend Andrew from public duty.

It was also reported that Andrew’s siblings – Charles, Anne and Edward – also ruled out his return to public duty at a meeting in January. 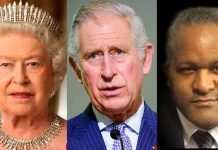 Prince Harry Has Finished Writing his Memoir and the Contents Will Make Prince Charles Want to Hide, Royal Expert Says