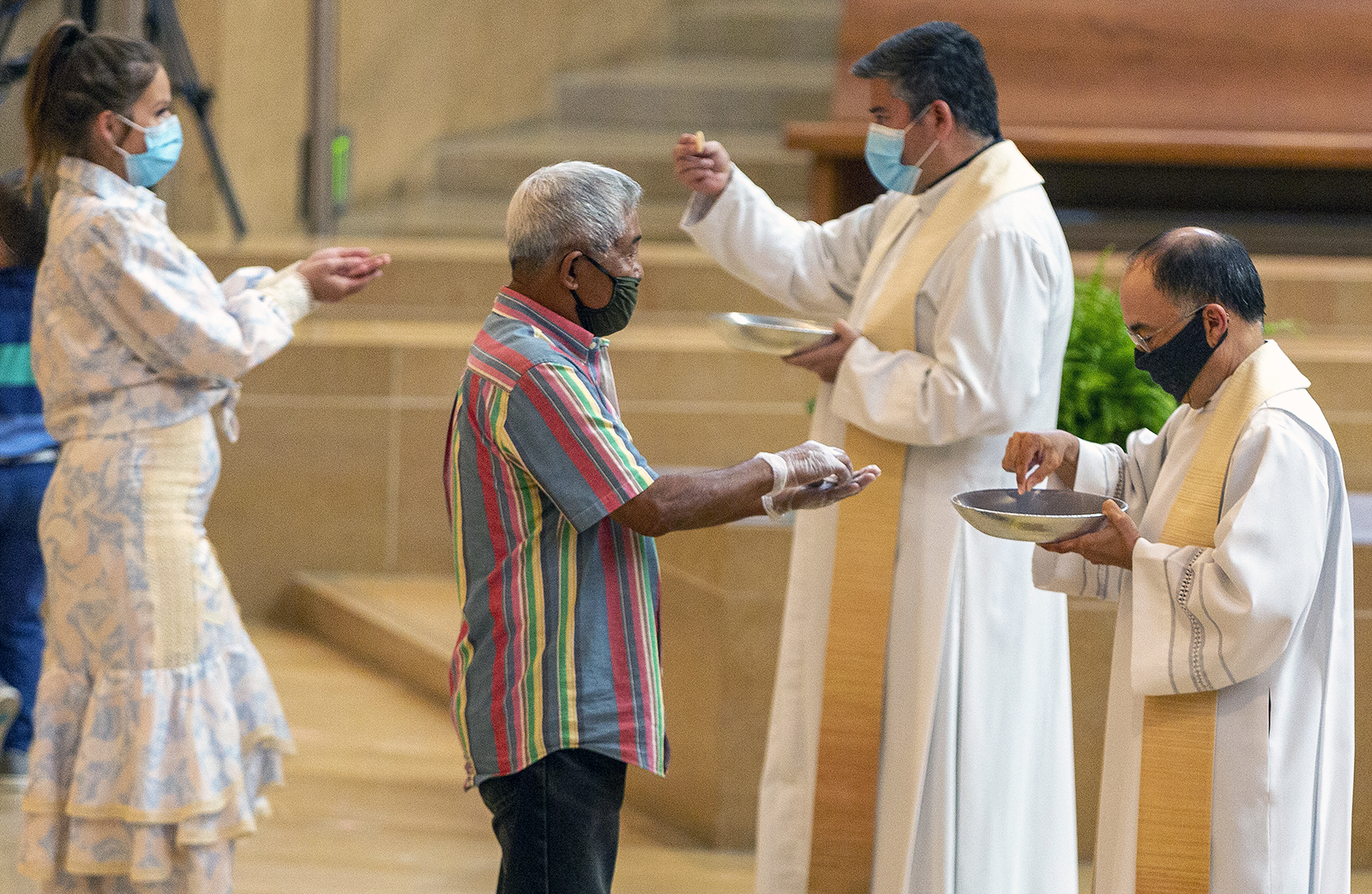 (RNS) — Throughout the different stages of the pandemic, Our Lady of Guadalupe Catholic Church in Mecca — a largely Latino migrant town in Southern California’s Coachella Valley — distributed face masks and food, hosted COVID-19 tests and advocated for the vaccine as soon as it became available.

The Rev. Francisco Valdovinos, who pastored the church, died of COVID-19 in January. His legacy has helped ignite a consciousness around public health and COVID-19 prevention among farmworkers and others. He mobilized the church as a central service site for pandemic assistance and many remember him as giving “his life for his people.”

To Luz Gallegos — executive director of TODEC Legal Center, an immigrant rights group in Southern California’s Inland Empire — the region’s Catholic diocese, coupled with public health leaders and community groups, was instrumental in helping her organization dispel misinformation and increase access to the vaccine in the region.

Gallegos sees priests such as Valdovinos as organizers who “have passed away exposing their life for their community.” Her own uncle, also a Catholic priest, died from the virus. And as Latinos, she said, “we’re so big on faith, but faith is not going to be a miracle.”

“If we’re not proactive and take the vaccine, the miracles are not going to just come,” said Gallegos, who is Catholic.

When considering the United States’ major religious groups, Latino Catholics are among the most vaccinated.

The Pew Research Center found that 82% of Catholic adults said they were at least partially vaccinated as of August — data that included 86% of Latino Catholics and 79% of white Catholics.

Among Protestants, 73% of white nonevangelicals and 70% of those who are Black said they had received at least a dose, but the share was much lower among white evangelical Protestants (57%), the Pew study found.

To Jonathan Calvillo, a sociology of religion professor at Boston University, Catholic social teaching serves as an “important theological foundation” for Latino Catholics in “addressing the pandemic as a matter that is affecting the most vulnerable.”

Calvillo points to a document leading up to the first-ever Ecclesial Assembly of Latin America and the Caribbean in Mexico City, where Catholics will discuss the future of the church in those regions. The document lists the experiences of COVID-19 under the commitment of the church to social justice.

“Even though that section doesn’t discuss the vaccine, it points to ways that the pandemic has exposed issues of inequality in our societies,” Calvillo said.

“This approach points to an important foundation for Latinx Roman Catholics that facilitates understandings of vaccine distribution as a social justice issue,” Calvillo added.

Latinos in the U.S. have been disproportionately impacted by COVID-19, and along with Black Americans, have been less likely overall than white Americans to have received the vaccine. But recent data show these disparities have been narrowing over time, particularly for Latinos, and even more so for Latino Catholics who have been urged by their leaders to get vaccinated to “protect the most vulnerable.”

While Latino Protestants have lagged behind their Catholic counterparts in vaccine acceptance — in March they had the highest rate of vaccine hesitancy among religious groups at 42% — the group underwent a marked shift between March and June, with only 26% reporting vaccine hesitancy.

The Rev. Gabriel Salguero, founder of the National Latino Evangelical Coalition, partnered with the Ad Council in a public service announcement for faith leaders in Spanish to dispel vaccine myths among Latino evangelicals, many who, Salguero said, carry an “apocalyptic” view and who see the vaccine as the “mark of the beast or sign of the times.”

In East Los Angeles, the Rev. Carlos Rincón — who pastors the Assemblies of God church Centro de Vida Victoriosa — preaches that getting vaccinated is a way to care for others and to show “love to God, to our neighbors.” He tells his largely Latino immigrant congregants, most who are from Central America, that science is a “gift from God,” but he recognizes that in the evangelical Pentecostal world, “I am an exemption.”

Only a minority of his congregants are against the vaccine, but “we are connected to a larger evangelical world with different voices,” Rincón said. ” … That’s why they’re resistant, because they somehow believe that this is something the government is imposing.

“When I go to other churches, there’s a greater resistance,” said Rincón, whose church has partnered with the county to host COVID-19 testing. “There are churches that teach totally against getting vaccinated. … Those are the people that are influencing some of the members of our church.”

RELATED: The pandemic has helped religion’s reputation. Do religious vaccine resisters put this progress at risk?

Meanwhile, Catholic leaders too have been working to dispel vaccine hesitancy — particularly initial concerns over the Johnson & Johnson vaccine’s use of cells with distant ties to abortion “in development and production” — and have referred to the vaccine as “pro-life” and a social justice issue.

In August, Pope Francis encouraged Catholics to receive the COVID-19 vaccine, calling it “an act of love” in a public service announcement aimed at a global audience.

“Thanks to God’s grace and to the work of many, we now have vaccines to protect us from COVID-19. They bring hope to the end of the pandemic, but only if they are available to all and if we collaborate with one another,” Francis said in the ad in Spanish with English subtitles.

The Rev. Austin Doran, pastor of St. Anthony Catholic Church in the Los Angeles County city of San Gabriel, has commended “the leadership of the Catholic Church, starting with the pope.” He appreciated that Gomez, his archbishop, participated in the public ad with Francis.

Doran experienced firsthand how the virus infiltrated the homes of his parishioners, many of them Spanish-speaking and essential workers living in small apartments and houses they share with family. He saw relatives of parishioners, of church volunteers and staff die after being infected with the virus.

When the vaccine became available, Doran and other religious leaders and organizers urged county officials to bring the medicine to residents who were eligible for the vaccine, but who didn’t have access to it. They offered their churches as potential vaccination sites.

“I think those efforts, it sounds like they’ve been fruitful,” Doran said

The Rev. Manuel Cardoza, who pastors Our Lady of Hope Community in San Bernardino, California, said that among Catholics and Latinos, “there’s an understanding that we’re not just looking out for ourselves.”

At his parish, Cardoza has been a big proponent of the vaccine. He’s written letters to parishioners, detailing the number of deaths caused by the pandemic and highlighting how the vaccine can help put an end to it. He participated in a public service announcement about the vaccine.

Cardoza also documented the day he got vaccinated, similar to when Bishop Gerald Barnes and Bishop Alberto Rojas, of the Diocese of San Bernardino, got their pictures taken when they received their dose of the Pfizer vaccine at a Catholic hospital.

“We generally see things as a collective, as a whole,” Cardoza said. “What happens to one really does happen to everyone else. It’s not limited to the flock here that comes to church, but really, it extends to the community as a whole. … I think that’s part of Hispanic culture.”

Cardoza, however, does acknowledge that some parishioners have had vaccine concerns, particularly about the symptoms. And, among Latino Catholics, a big issue has been whether the vaccine has ties to abortion, he said. Cardoza said he tells parishioners that “the whole hierarchy in the Catholic Church is essentially pretty much 100% on board with getting vaccinated and in no way do we say we’re in support of abortion.”

Cardoza added: “There’s plenty of nonconspiracy theory information out there that you can read yourself and you can see the efficacy of the vaccine.