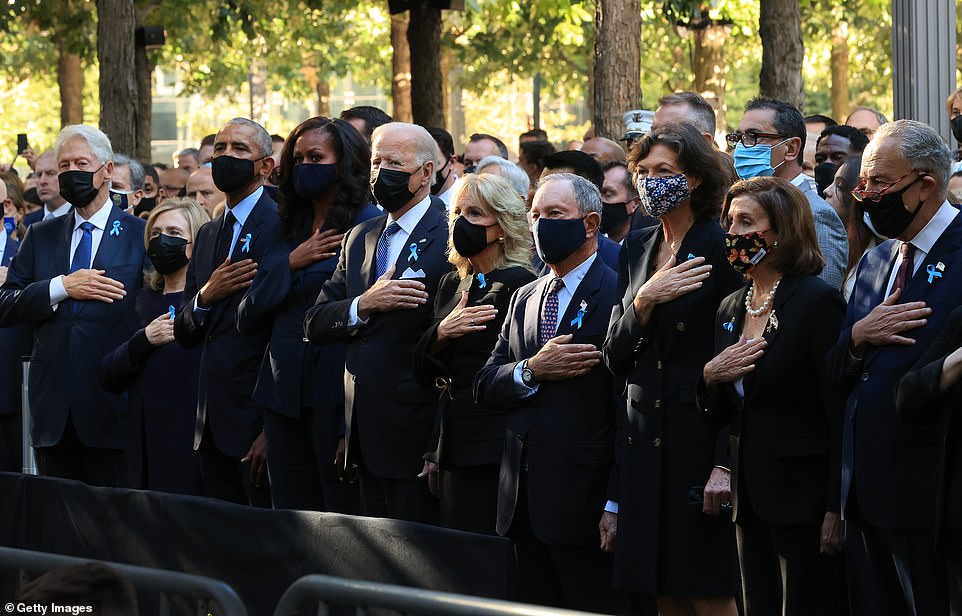 The Bidens filed into the event with former President Barack Obama and Bill Clinton and former first ladies Michelle Obama and ex-Secretary of State Hillary Clinton.

Biden didn’t speak at the ceremony in New York – as he chose to release a video Friday sharing his reflections instead.

Later in the day, Biden will travel to Shanksville, Pennsylvania and then the Pentagon – where he’ll lay wreaths at the other two sites Americans perished on 9/11.

Vice President Kamala Harris was attending Saturday morning’s ceremony in Shanksville – and then join up with Biden at the Pentagon.

Former President George W. Bush, who was president during the attacks, will deliver remarks in Shanksville.

Former President Donald Trump said on Fox News on Friday that he will travel to Ground Zero to mark the attacks’ 20th anniversary, but didn’t specify timing.

He didn’t run into Biden on Saturday.

Giuliani was among the high-profile Trump allies who pushed the so-called ‘big lie’ – that Biden wasn’t the legitimate winner of the 2020 election.

‘Congratulations to Rudy Giuliani (for the 20th time!), the greatest Mayor in the history of New York City, for having shown such leadership and doing such an incredible job during and after the attack on our Nation!’ the ex-president said.

Biden avoided some additional awkwardness at Saturday’s ceremony by signing an executive order that ordered a review of the classified documents related to the attack – something 9/11 families, first responders and survivors have demanded.