Maya Rudolph will be laughing all through awards season.

The “Saturday Night Live” alum, 49, made history on Sunday at the Creative Arts Emmys when she won two awards in the same categories she won in last year — and became the third black woman to win two years in a row.

The funnywoman earned a Best Guest Actress in a Comedy Series statuette for her “SNL” appearances this past season, and was named Best Character Voice-Over for her work on the animated comedy “Big Mouth.”

“Wow, that’s amazing. I feel honored to be part of something like that,” Rudolph told reporters, according to Deadline. “I feel like this Emmy is very fitting, in that it’s for something that feels like such a personal achievement … I feel really honored that I’m part of a legacy as the third woman of color to achieve that.” 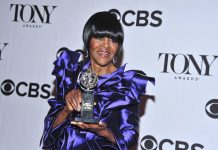