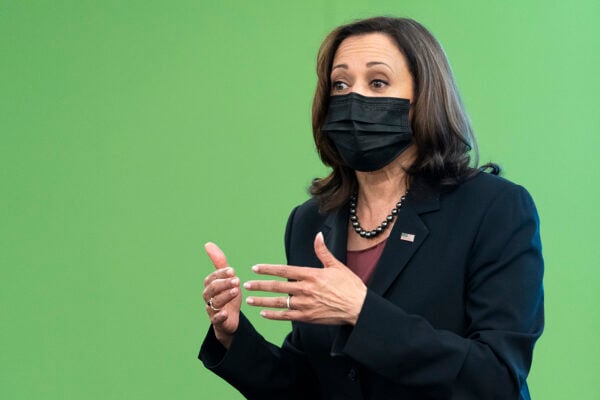 Vice President Kamala Harris was at George Mason University in Virginia to give a talk about voting rights. She then took questions from the students, one of whom said: “A lot of taxpayer money is allocated for funding the military, whether it’s in backing Saudi Arabia or in Palestine.”

Let us deconstruct this.

I am familiar with this nod. I do it all the time — in teaching, and in pastoral counseling.

The nod does not mean: “Yes, I agree with you.”

Had Vice President Harris merely concluded the interchange with the nod, it would have been fine. “I hear you. I see you.”

It was the follow up that troubled me: “Your truth cannot be suppressed.”

Let us bracket, for a moment, whether what this student said was, in fact, “truth” — as in “accurate.”

Let us, rather, focus on the vice president’s phrasing: “your truth.”

Vice President Harris has walked herself into the central problem of our time: intellectual relativism.

Moreover, there is my truth, your truth, his truth and her truth. Truth is something I own. It is a commodity.

This is both intellectually fraudulent and morally problematic. Because, as Vice President Harris surely knows, there are many people walking around with their own version of scientific truth. They are the anti-vaxxers and the anti-maskers. Their actions and inactions have proven to be dangerous.

Vice President Harris also surely knows that when opinion replaces truth, you get people claiming the election was stolen. You get people who say there is a secret cabal of child molesters who control politics (the QAnon conspiracy).

I assure you: If Vice President Harris had encountered someone who offered those “truths,” she would not have nodded, and she certainly would not have said: “Your truth will not be suppressed.”

I would also remind Vice President Harris of something that happened in 2018. The late Senator John McCain was running for president against Senator Barack Obama. Recall how a woman on the campaign trail expressed her concerns that Obama was an “Arab.” Senator McCain immediately pushed back. He cited Obama’s fundamental decency and said he and Obama merely have differences on politics.

Yes, McCain’s response was problematic because it assumed an Arab could not be decent.

But, here is the point: He did not say to this woman, “Your truth cannot be suppressed.”

Vice President Harris did not only err in not challenging the student’s interpretation of the Middle East. She made a larger intellectual error — engaging in an intellectual relativism in which my opinion becomes my truth.

This is an intellectual paradigm that has been afflicting academia for decades. It is vacuous, and it is selling our young people short.

I wish that Vice President Harris had summoned up the courage of the late Senator McCain and said something along these lines:

First of all, that is not our subject today. But, more than that, we can certainly agree to disagree on how we interpret our military budget. Israel is our ally and one of our closest friends. Israel purchases weapons from us. That helps defend them against their enemies, while simultaneously helping us. This administration is committed to a two state solution, and we all look forward to the day when no one in the Middle East has to purchase weapons from our country, or from anyone.

Instead, Vice President Harris gave Jewish Republicans an early Hanukkah gift. Her nod to the student, and her defense of his truth, came far too quickly on the heels of the failed attempt to block funding for the Iron Dome defense system.

Let us be clear: The spending package passed, overwhelmingly. But the anti-funding posturing, combined with Vice President Harris’ failure to sensitively confront that student, only fuels the theory that many are now nurturing — that the Democratic Party is turning against Israel.

It happens not to be true. Not by a long shot.

But, the intellectual Pandora’s box is already open. Because, after all, how can you disagree with someone’s “truth”?

Years ago, I told a confirmation class: “Your mind should never be so open that everything falls out.”

It is still a valid piece of advice.

There are now too many people who need to heed it.