Daniel Whyte III, Who Has Preached the Gospel and the Word of God Nearly Every Day for Over Five Years and Who Predicted This Plague Repeatedly for Over Eleven Years, Tells Prime Minister Boris Johnson to Hold Fast on the Lockdown for Great Britain for the good of the Whole World. He Also Tells the Olympic Leadership Again to Shut Down the Olympics for the good of the Whole World. Please Know That Not Only in America but for the nations of the World, if the Church and the Government Leaders of the World Do Not Confess and Repent of All of Their Sins and Do Not Cease Causing Their Governments, an Institution That God Created and Is Over Just Like the Institution of the Church and the Institution of the Family, From Endorsing and Sanctioning Homosexuality, Homosexual Marriage, and the Homosexual Agenda, Their Country Will Be Destroyed Along With America. In fact, you are witnessing the loving, merciful, slow-rolling destruction of America and other countries of the world right now. God Is Very Loving, Merciful, and Gracious, but There Are Certain Things Where God Has to Draw the Line for the Good of the People. To All People Who Have Not Believed in the Lord Jesus Christ, Please Understand That You Need to Believe in Him Now So That You Can Be Saved From Hell and Saved to Heaven Because Much More Destruction and Death Is Coming. For Those Who Claim to Be Believers in Christ, You Need to Pray, Seek God’s Face, Turn From Your Wicked Ways, and Repent and Get Back to Your First Love and Prepare to Meet Your God. 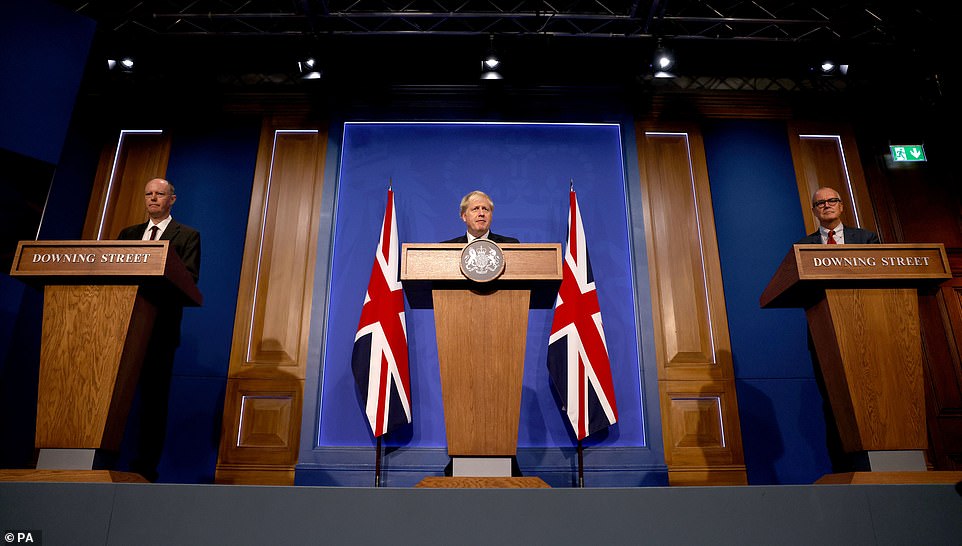 Boris Johnson told weary Britons he could not rule out another winter lockdown yesterday as his doom-mongering advisors warned of a potential seven-fold increase in hospitalisations within weeks, despite cases currently remaining static.

Experts have told the PM he must be prepared to ‘go hard, go early’ if cases start to tick up, bringing back rules such as working from home with as little as a week’s notice.

Mr Johnson said compulsory masks and vaccine passports could still be rapidly imposed if the jab programme fails to hold the virus at bay.

The PM claimed the ‘smaller changes’ in a new ‘Plan B’ should mean ‘we don’t need to go back to the lockdowns of the past’.

But he refused to rule one out, saying he would do whatever was necessary to ‘prevent the overwhelming of the NHS’.

It comes as the Government’s scientific advisers warned the number of patients being admitted to hospital with Covid could rise to 7,000 a day within weeks.

Despite the recent flattening off in cases and little sign of a post-summer surge, modellers from a Sage sub-committee claimed daily hospitalisations could reach almost double their January peak.

The predicted total is worse than last year and seven times that of the latest figures – which show the number admitted in England was just 1,009.

Yet the Sage modellers called on ministers to be prepared to abandon their ‘light-touch’ measures and bring in fresh curbs soon or risk a major increase in cases and hospitalisations, due to children returning to school and workers going back to the office.

The warnings came as:

Infections fell 14 per cent in a week despite schools returning. 26,628 new cases yesterday with 185 deaths;
Chris Whitty argued with Nicki Minaj after saying she should be ‘ashamed’ for spreading a vaccine scare story;
Sajid Javid said that it was ‘highly likely’ that frontline NHS staff would be required to have the Covid-19 jab;
He warned people to keep wearing masks and meeting up outdoors this autumn to help slow the virus’ spread;
Mr Johnson hinted fully vaccinated travellers will no longer have to get a costly PCR test when they get home;
Businesses were warned they may get a week’s notice of the introduction of mandatory vaccine passports;
Employment rates jumped back to pre-pandemic levels.