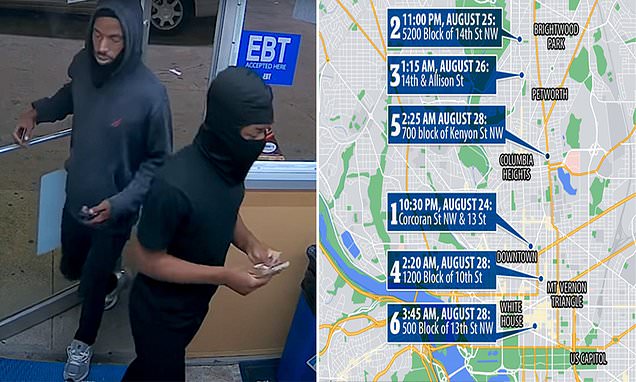 The young teen, who police only described as a juvenile male from Southeast DC, was apprehended on Tuesday and charged with five counts of kidnapping while armed (with a gun) and one count of armed robbery. The Metropolitan Police Department says that the teen participated in the abductions and robberies on the 500 block of 13th Street NE, 1300 block of Corcoran Street NW, 1200 block of 10th Street NW, 5200 block of 14th Street NW, another at the intersection of 14th Street and Allison Street NW, and a sixth in the 700 block of Kenyon Avenue. In all six incidents, the victims were held at gunpoint and ordered into a nearby vehicle or simply robbed at gunpoint, with the suspects forcefully obtaining the victims’ bank account information before being left at a secondary location. Police say the suspects later withdrew funds from the victims’ bank accounts. Meanwhile, Washington DC cops are now hunting for the remaining gang of kidnappers, who they say abducted five people in just four days between August 24 and 28.

There’s a devil loose: Teacher left distraught after being barred from raising her own children ‘kidnaps 9-year-old girl by luring her with sweets before...