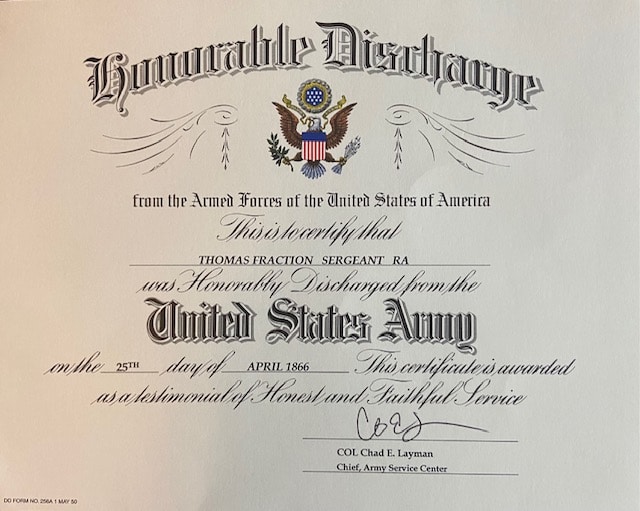 A request to the United States Army for a correction to the military record of United States Colored Soldier Thomas Fraction, who fought for the Union during the Civil War, was granted on July 7th, 2021. Thomas was a Civil War soldier who fought alongside his brother Othello Fraction for the 40th U. S. Colored Infantry out of Tennessee after escaping from slavery in Blacksburg, Virginia.

The brothers were two of at least four individuals enslaved on the Smithfield plantation who would escape to fight for the Union during the Civil War to gain their freedom.  During his service, Thomas Fraction would grow in rank from Private to Sergeant (a rarity for Black soldiers and especially enslaved peoples at that time). During their service, Thomas and his brother were granted a 30-day furlough at which time they returned to the Smithfield plantation despite threats from their enslaver. Upon their return, Thomas was shot by his former enslaver, Confederate soldier Robert Preston, and then jailed. After learning of the events that happened to Thomas, the Union Army demoted Thomas from Sergeant to Private and dishonorably discharged him. Thomas would attempt to have his record corrected up until his death in Salem, Virginia in 1892. Dr. Kerri Moseley-Hobbs (More Than a Fraction Foundation) petitioned the U.S. Army to review Thomas’ case and recognized the injustice that he experienced, and posthumously correct Thomas’ military records. Dr. Moseley-Hobbs is the 4th great-grand daughter of Thomas Fraction.

Upon reviewing the case, on July 7th, the U.S. Army provided a Certificate of Honorable Discharge for Thomas Fraction with a letter acknowledging the correction to his military record, and the reinstatement of his rank as a Sergeant.

The journey for Thomas Fraction to receive the status deserved has been 155 years in the making. Dr. Kerri Moseley-Hobbs submitted her request to the U.S. Army, with documented evidence of the injustice, more than 4 years ago. The petition to correct Thomas’ record is part of a mission and vision that began in 2014 when Dr. Kerri Moseley-Hobbs and her maternal grandmother decided to research for more information about their maternal ancestors. The search ended at the campus of Virginia Polytechnic Institute and University (Virginia Tech), which was originally the Smithfield and Solitude plantations, where Thomas Fraction and his family were enslaved by the Prestons family. During Thomas’ service he would display moments of leadership that garnered him the status of a level 5 Sergeant.