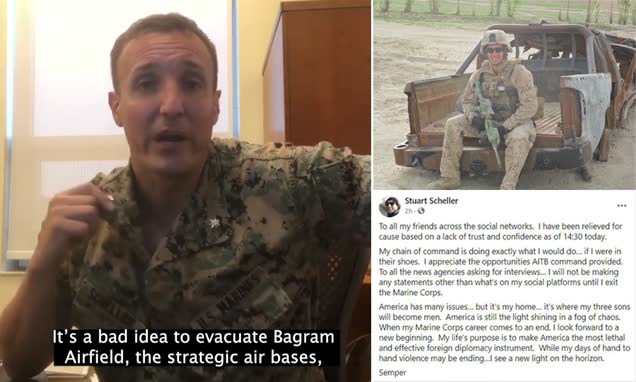 An active duty Marine Corps lieutenant colonel was relieved of his duties Friday after publicly demanding leadership take accountability for the deadly disaster in Afghanistan.

Lt. Col Stuart Scheller called out Secretary of Defense Lloyd Austin, Chairman of the Joint Chiefs of Staff Gen. Mark Milley and others for not ‘raising their hands and accepting accountability or saying, “We messed this up.”‘

‘The reason people are so upset on social media right now is not because the Marine on the battlefield let someone down,’ Scheller said in a nearly five-minute video posted on Facebook and LinkedIn.

‘People are upset because their senior leaders let them down. And none of them are raising their hands and accepting accountability or saying, “We messed this up.”‘

The video has been shared on Facebook over 23,000 times by Friday evening and has over 3,100 comments, most of which are supporting Scheller’s bravery for speaking out.