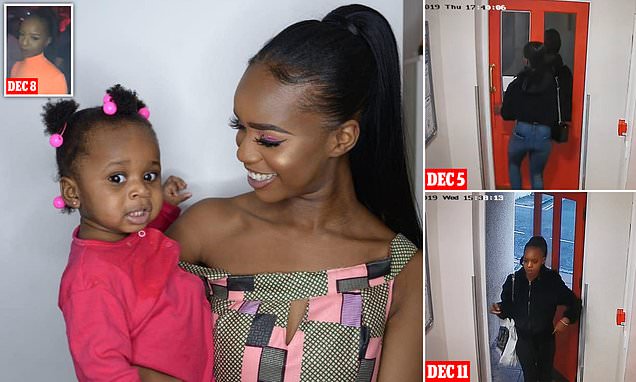 A teen mother broke down in tears as she was jailed for nine years after leaving her baby to starve to death while she went partying for six days to celebrate her 18th birthday. Verphy Kudi went to a 1990s music concert in Elephant and Castle and even had a DJ announce her birthday during her days-long jaunt away from home, a court heard. Video shown in court showed her leaving her flat on December 5 2019, top left, and returning six days later. Mobile phone images also showed her partying in London while away, inset. All the while her 20-month-old daughter Asiah was alone in her flat in a ‘supported housing’ block in Brighton more than 50 miles away. Asiah died from influenza and starvation after having been left unattended for five days, 21 hours and 58 minutes, prosecutors said. When paramedics were finally called to the flat on December 11, 2019 after Kudi had returned, they found her ‘incoherent, distressed and distraught’ and her daughter lying on the floor. Kudi, now 19, today appeared in the dock at Lewes Crown Court on Friday for sentencing after pleading guilty to manslaughter. She broke down in tears as she was jailed for nine years and taken away by court staff. Judge Laing said the baby had gone through ‘almost unimaginable suffering’ before dying alone in the flat.