Indonesia’s navy said Wednesday that it seized an oil tanker that was wanted by Cambodian authorities on suspicion of stealing nearly 300,000 barrels of crude oil.

The Bahamas-flagged tanker MT Strovolos was detained in waters off Indonesia’s Riau islands in late July, the navy said in a statement. The captain and 18 other crew members — made up of Bangladeshi, Indian and Myanmar nationals — were also detained.

After they were detained, the crew members were sent to quarantine before their case was processed by investigators, the navy said.

The captain of the tanker, a Bangladesh national, is suspected of anchoring in Indonesian territory without permission and faces up to one year in prison and maximum fine of 200 million rupiah ($13,900) if found guilty.

When it was seized, the tanker had about 298,000 barrels of oil on board, the statement said. 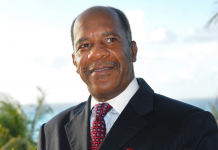