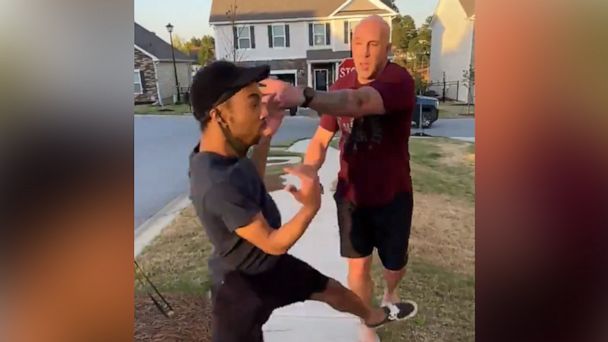 A noncommissioned Army officer depicted in a viral video accosting and shoving a man in a South Carolina neighborhood has been convicted of third-degree assault.

A magistrate judge found Fort Jackson Army Sgt. Jonathan Pentland guilty of the misdemeanor Monday after a two-day trial, news outlets reported. He will have to choose between 30 days in jail or a fine of $1,087. Pentland was suspended from his post prior to the trial.

Pentland, 42, is white and the man shoved is Black. The video of part of their confrontation became a racial flashpoint when it was posted to Facebook in April after Pentland screamed, “You’re in the wrong neighborhood.”

But race was never mentioned during Pentland’s trial in Columbia.

“As a young man, if I go on a walk, I shouldn’t feel any form of pressure,” Williams said after the verdict.

The officer who arrested Pentland testified that the video of the confrontation spoke for itself. Pentland weighs about 100 pounds (45 kilograms) more than Williams and was towering over the other man while yelling.

Prosecutor Paul Walton said Pentland broke the law three times: when he shoved Williams before the video started and again as Williams took an awkward step toward Pentland’s wife, and then when he slapped Williams’ cellphone out of his hand as he held it up trying to record Pentland.

“His pride is hurt,” Walton said of Pentland. “He’s a drill sergeant and he’s used to people doing what he says.”

Williams’ father cried on the stand as he testified that his son had a form of cancer that caused his brain to swell two years ago and that has left him struggling to understand things since.

Pentland’s lawyer said the two-minute video was only a small part of the confrontation that took place over 20 minutes.

Instead of fully investigating the incident — the officer that signed the arrest warrant testified he never listened to 911 calls about Williams’ odd behavior, such as allegedly touching a stranger’s baby — Richland County Sheriff’s Department leaders jumped to a conclusion after public reaction to the video, said defense attorney Benjamin Allen Stitely.

“They didn’t want the truth. They wanted to make up a bully for TV’s sake,” Stitely said.

Pentland said his threatening demeanor and strong language stemmed from his military training to deescalate situations and resulted from fear his family would be hurt. He said he was acting in self-defense and not “trying to pick a fight.”

“It’s embarrassing to the community,” Pentland testified. “I’m sorry for the way it escalated. Anybody looking back at this, you can watch that video and 100% see that it looks worse than it is. I did what I felt I had to do to protect my friends and family.”

Pentland said he received “thousands” of death threats after the video went viral and his wife had to find a new job and his daughter a different school.

Kansas City private school is embroiled in racism storm after white boy asked white girl to homecoming with sign saying: ‘If I were black,...