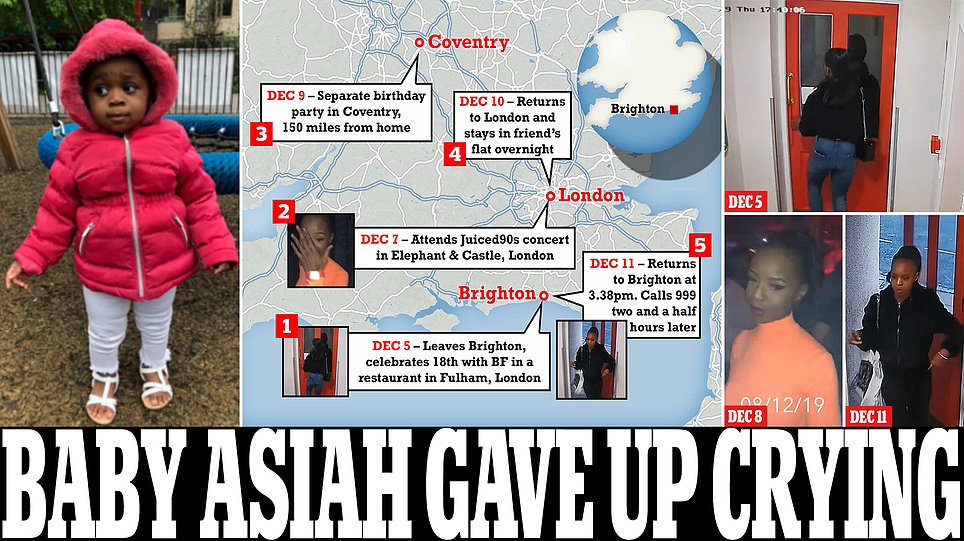 A helpless baby who starved to death after her teenage mother left her alone 11 times in two months did not cry because she knew it was pointless, a court has heard. Verphy Kudi, 19, was sentenced to jail for nine years yesterday after she left her 20-month-old daughter Asiah alone. She went to a 1990s music concert in Elephant and Castle and even had a DJ announce her birthday during her days-long jaunt away from home, a court heard. All the while Asiah was alone in her flat in a ‘supported housing’ block in Brighton more than 50 miles away. Asiah tragically died from influenza and starvation after having been left unattended for five days, 21 hours and 58 minutes, prosecutors said. When paramedics were finally called to the flat on December 11, 2019 after Kudi had returned, they found her ‘incoherent, distressed and distraught’ and her daughter lying on the floor.

There’s a devil loose: Little Arthur’s step-mother is found GUILTY of his murder and his father is convicted of manslaughter after pair tortured, starved...

There’s a devil loose: It is revealed Arthur Labinjo-Hughes’ real mother was jailed for 11 years after stabbing her lover to death in frenzied...

Houston House of Horrors mother has bond RAISED to $1.5million as it’s revealed she was getting $2,000 a month towards childcare while her three...

There’s a Devil Loose: House of Horrors Mother and Her Gangster-wannabe Boyfriend (With Family Over Everything Tattoo) Were Picked Up by Police in Houston...