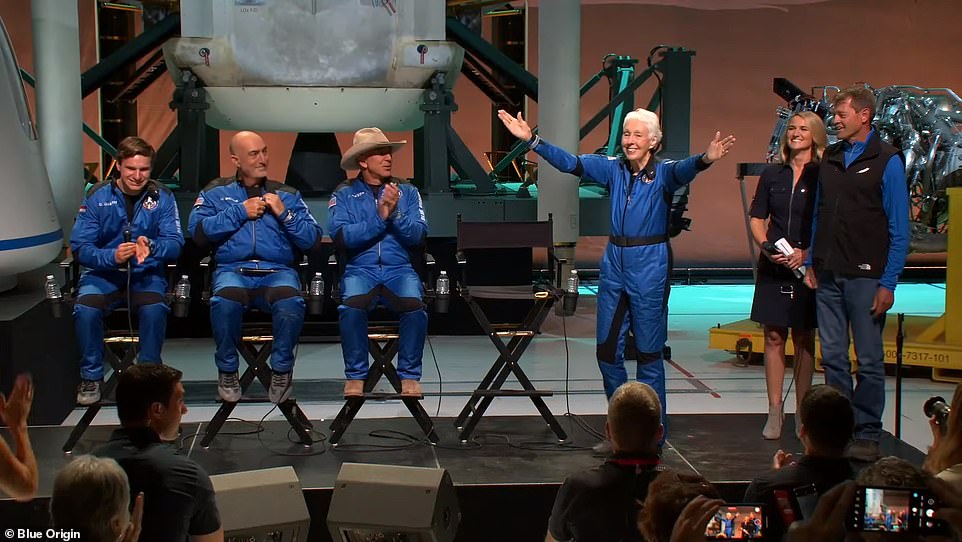 Mary Wallace ‘Wally’ Funk, 82, finally achieved her dream on Tuesday when she launched aboard Blue Origin’s New Shepard rocket to just beyond the edge of space, and the space icon hopes to return as soon as possible.

At a press briefing following the launch, Funk was asked how it felt to be inside the capsule and the 82-year-old snapped out of her chair and let out a celebratory ‘woot!’

‘It was a great time and I want to go again and fast,’ she continued.

Funk told the audience in West Texas that she was ‘waiting a long time to finally get up there.’

‘I have done a lot of astronaut training and I could always beat the guys cause I was always stronger and did everything on my own.’

Following Funk’s speech, Bezos chimed in and said: ‘We can confirm that Wally once again in training outperformed the men.’

Funk joined Amazon found Jeff Bezos, his brother Mark and 18-year-old Oliver Daemen 66 miles above the surface, where they spent around four minutes in zero gravity while feasting their eyes on views that were out of this world.