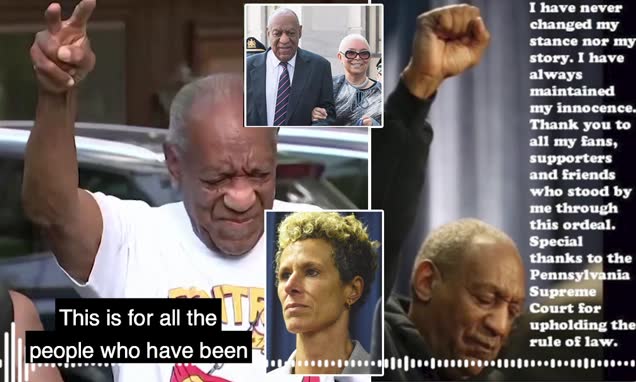 Bill Cosby has been released from prison after Pennsylvania’s Supreme Court overturned his sexual assault conviction in a surprise decision, ruling that a 2005 public promise by a prosecutor that he wouldn’t charge him gave him a false sense of security and led him to incriminate himself. Cosby was jailed in 2018 for sexually assaulting Andrea Constand (center, inset) in 2004. She had gone to the police in 2005 but the then Montgomery County DA Bruce Castor – who went on to become one of Trump’s impeachment lawyers – said publicly he was not going to pursue charges. The following year, Constand sued Cosby and in a civil deposition, he admitted using Quaaludes on women without their consent and said he did it to have sex with them. Over the next ten years, multiple women made claims against him publicly and with the police. In 2015, a new Montgomery County DA charged him, using the remarks he made in the 2005 deposition as part of the evidence against him. Cosby was convicted in 2018 and he appealed it, claiming it was an unfair prosecution in the first place and that he also didn’t get a chance at a fair trial because the judge allowed five women to testify as ‘bad act’ witnesses. Their allegations weren’t being prosecuted, but they all told stories of how he’d allegedly assaulted them.

Bill Cosby WILL go to trial in civil lawsuit alleging he assaulted 15-year-old girl at Playboy Mansion in 1974 as his lawyers say ‘mob...