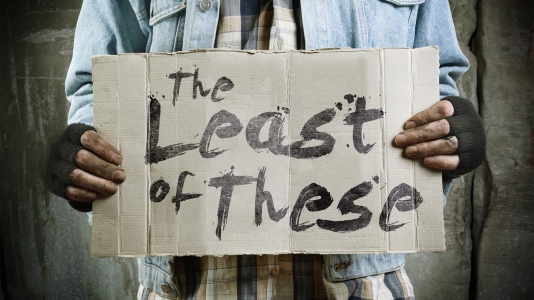 “Truly I tell you, whatever you did for one of the least of these brothers and sisters of mine, you did for me”—Matthew 25:40 (NIV).

A recent social media post from a friend gave me “God bumps.” The story she shared began with a dream she had about homeless people on her street. She writes, “People just kept walking past them. The words ‘the least of these’ kept coming in my spirit.”

After waking up, Stacy turned on the TV. “A Samaritan’s Purse commercial came on quoting Matthew 25, and talking about ‘the least of these,’” she said.

Later that morning, Stacy was sitting on a bench in front of their Galveston condo when a gentleman stopped by. Dressed as if he were on his way to work, he was clutching a Kleenex in his hand, and it was obvious he’d been crying. The stranger asked my friend if she knew of a service to help him get a bus pass because he was training for a job, requiring him to commute to Houston for the next four days. He also told Stacy about his son, who’d been abused, leading to his getting custody. Prompted by the Holy Spirit, my friend asked him an important question.

“Are you a believer?”

Replying, the man who said his name was Derrick, said, “I knew you were going to ask me that. Yes ma’am, I am. My dad used to tell me that God already knows everyone you will meet in your life, and you just have to find them.”

Then, the stranger said, “I only have two cans of soup, a loaf of bread, and a half gallon of milk in our rented room.” In addition, Derrick told her his son had celebrated his 13th birthday the day before. Even though his son knew times were tough, he had asked his father if he could have a cake to celebrate.