(The Conversation) — A new two-hour documentary on PBS examines the life and rise of Billy Graham, the famed preacher, who died on Feb. 21, 2018 at 99. Graham’s enduring legacy is that he helped shape the modern-day American right.

Graham’s rallies, known popularly as “crusades,” attracted millions of people all over the globe. His influence extended deep into American politics, and he provided spiritual counsel to several American presidents, from Harry S. Truman to Donald Trump.

Here are three articles from The Conversation U.S. that offer insights into his life.

In the early part of the 20th century, evangelicalism came to be seen as being “synonymous with intolerance and anti-intellectualism,” writes Andrew Dole, professor of religion at Amherst College.

In 1925 fundamentalists succeeded in bringing in legislation banning the teaching of evolution in public schools in Tennessee. That same year, as Dole writes, the young teacher, John Scopes, was prosecuted for teaching evolution. Known famously as the “Scopes monkey trial,” it made headlines all over the country.

Quoting the congregationalist minister Harold Ockenga, Dole points out that a new generation wanted to create “a progressive fundamentalism with an ethical message.”

Billy Graham, he writes, “would lead evangelicalism to revival.” As he says, “Graham, already a rising star, was soon adopted as the right man to represent the new ‘evangelicalism.’” Over time, Graham would “became the closest thing to an official spokesman for this movement,” which was then seen to be rescuing evangelicalism from fundamentalism.

Over the next few decades, Graham had an unparalleled influence on American politics. Scholar David Mislin points to the religious language that found its way into government and politics, “due in no small part to Billy Graham.”

Mislin writes that in 1953, President Dwight Eisenhower held the first National Prayer Breakfast, “at the strong encouragement of Graham.” The event is now an annual tradition that brings together high-profile political, military and corporate leaders in Washington, D.C., usually on the first Thursday of February. Eisenhower would later sign a bill placing the phrase “In God We Trust” on all American currency.

Mislin argues that in the early years of the Cold War, these actions emphasized the religious commitment of Americans. And Graham, as he writes, stressed the use of religious language, not just as a way to set the U.S. apart from “the godlessness of Soviet communism,” but to address other domestic concerns that included social welfare policies that conservatives business leaders and others were opposed to.

“To be sure, Billy Graham was not singularly responsible for all of these developments. But as his biographers have noted, he loomed large in the religious politics of the 1950s,” adds Mislin. 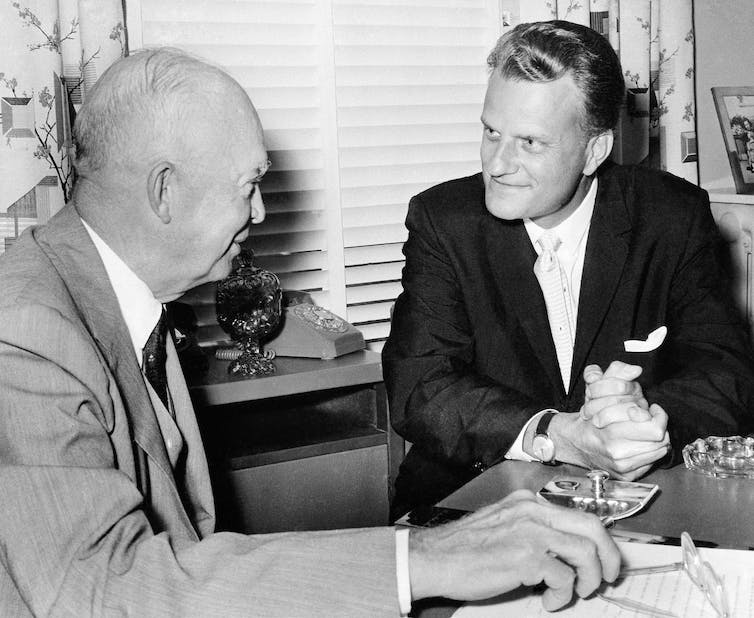 In addition to political influence, evangelical leaders such as Billy Graham deeply influenced the moral values and America as a Christian nation. Scholar Samuel Perry says for many evangelical leaders such as Billy Graham and Jerry Falwell Sr., social and cultural changes of the 1970s and 1980s “were signs of a fallen country.”

Part of this rhetoric was that God punishes America when Americans are unfaithful to his commandments, writes Perry. In the lead-up to Obama’s reelection, Graham wrote an article with a premise that Obama’s leadership would lead to God’s wrath. It was, for Graham and other evangelical leaders, “an intentional move away from Christian values toward immorality,” says Perry.

“Trump offered himself as an antidote to that fallen America and as a savior from the destruction,” he writes.

What is the future of evangelicalism?

Evangelicalism is once again going through a change. As scholar Andrew Dole points out, “evangelicalism of the future will be smaller, grayer, more closely identified with the Republican Party, and more out of step with the views of younger Americans than it is at present.”

To many it might appear that Billy Graham was the last of evangelicals who enjoyed nonpartisan support. However, adds Dole, “as one who teaches the history of evangelicalism, I can imagine different possibilities.”

Editor’s note: This story is a roundup of articles from The Conversation’s archives.