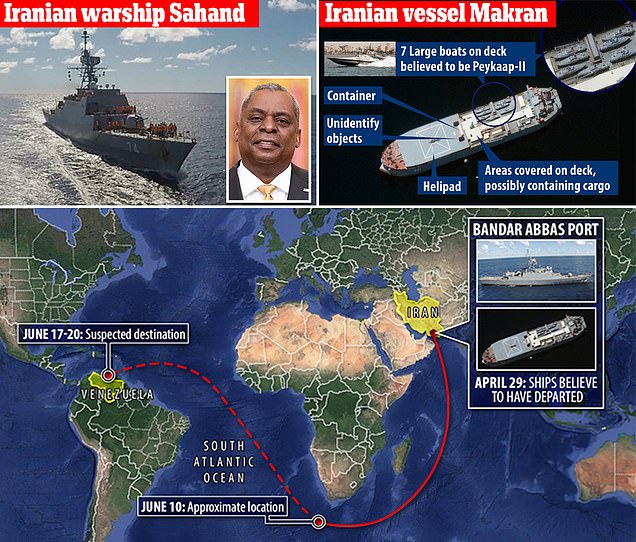 US Defense Secretary Lloyd Austin told lawmakers Thursday that he was ‘concerned’ about two Iranian warships thought to be carrying weapons bound for Venezuela amid diplomatic warnings to the country to turn them away.

Speaking before the Senate Armed Service Committee, Austin said that he shared senators’ worries about the ships, which are believed to be somewhere in the Atlantic Ocean after departing from the Iranian port city of Bandar Abbas last month.

‘I am absolutely concerned about the proliferation of weapons, any type of weapons, in our neighborhood,’ he told members of the committee.

It was the first public remarks he has made about the vessels, which US intelligence officials have been tracking since they embarked on an unprecedented mission around the east coast of Africa toward the Atlantic Ocean, Politico reported.

They came as the Biden administration has been pressuring Venezuela as well as Cuba to turn the ships away, with a senior administration official saying that the US views delivery of weapons in its hemisphere as a threat and that it will take ‘appropriate measures’ to prevent it.

The US has also been reaching out to other countries in region, asking them to turn the ships away as well, the outlet reported.

Iranian state TV also reported Thursday that the ships – the domestically built destroyer Sahand and support vessel Makran – had made it to the Atlantic Ocean in what Iran’s deputy army chief Admiral Habibollah Sayyari described as the Iranian navy’s longest and most challenging voyage yet.

Iranian state TV released a short clip of the destroyer cruising through the Atlantic’s rough seas.