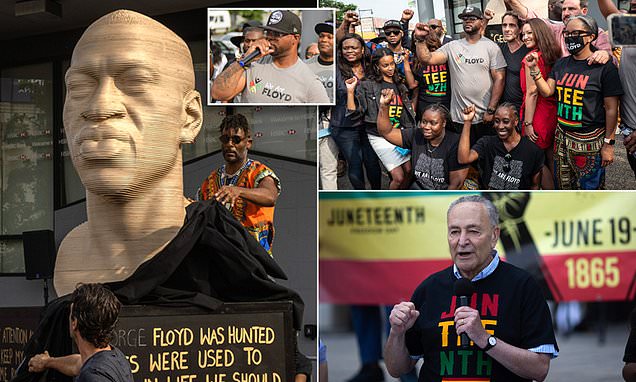 Senator Chuck Schumer and mayoral candidate Eric Adams have joined New Yorkers in a Brooklyn march Saturday while Tulsa residents have come together for community yoga as Juneteenth was celebrated as a federal holiday for the first time in US history.

Americans nationwide commemorated the official end of slavery in the US with a series of monumental events Saturday including marches, parades and community events.

In New York City, Senate Majority Leader Schumer sported a black t-shirt emblazoned with ‘Juneteenth’ as he addressed crowds at a rally outside the Brooklyn Library.

Adams, who is thought to be the front-runner in the race for the city, also attended the rally in Brooklyn, posing for photos and waving at other people who turned out to celebrate the day.

Elsewhere in the city, Terrence attended the unveiling of a George Floyd statue in Flatbush Saturday morning in honor of the black man whose murder by a white cop on Memorial Day 2020 sparked a racial justice movement nationwide.

President Joe Biden signed a bill into law Thursday, declaring Saturday the first Juneteenth National Independence Day as he vowed not to ‘rest until the promise of equality if fulfilled for every one of us in every corner of this nation.’

Juneteenth commemorates the end of slavery in the US, with its name stemming from June 19 1865 when the last group of enslaved African Americans learned of their freedom under President Abraham Lincoln’s 1863 Emancipation Proclamation.