A Fort Worth family was left reeling after a father of four was fatally stabbed outside a youth track meet on May 21.

Quintus Record, 40, was a loving father who was known for his goofiness and total support of his children, said his daughters McKenzie Record, 19, and Destinye Record, 21.

“He was a really, really good dad,” Destinye said. “He supported us and our dreams and the things that we wanted to do. He stood behind us.”

He always attended Destinye’s son’s football games and was active in his kids’ hobbies and extracurriculars. The night he was killed, Record was doing the same thing for a friend’s daughter after the friend passed away. On May 21, he and other family members attended the girl’s track meet at Clark Stadium, at 5201 CA Roberson Blvd.

Cedric Smith Jr. and Kedric Smith were removed from the stadium for fighting, witnesses told police. 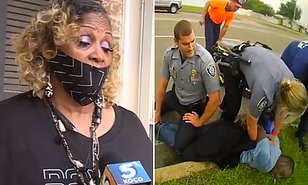 WATCH – ‘It’s Unbearable to Know he Took his Last Breath Trying to Get People to Hear him’: Mom of Black Oklahoma Man who...

WATCH – ‘It Was the First Time She Had Felt Love, I Felt Honored to Give Her That’: Cop Tells of Emotional Moment He...