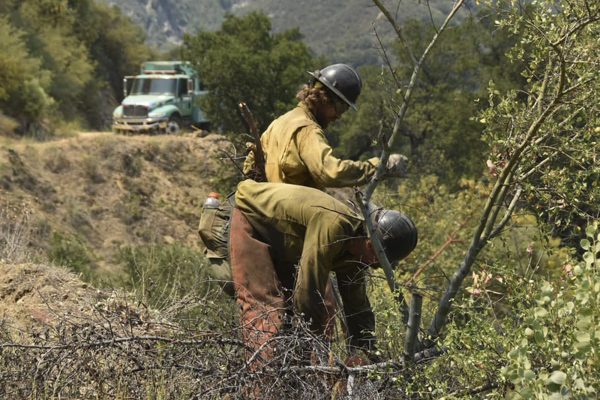 BIG SUR, Calif. (AP) — A group of firefighting monks was ready to defend a Buddhist monastery being threatened Tuesday by a wildfire burning in the rugged central coast mountains south of Big Sur.

The seven monks have been clearing brush from around the Tassajara Zen Mountain Center and running a sprinkler system dubbed “Dharma rain,” which helps keep a layer of moister around the buildings, said Sozan Miglioli, president of San Francisco Zen Center, which operates the monastery.

“The blaze is about a mile away but we’ve been lucky with the weather, it has really cooled down,” Miglioli said.

The fire was climbing uphill among chaparral, grass, and scrub. The steep, remote area meant that the 500 firefighters had to hike in to battle the flames. They were aided by water-dropping aircraft.

Most people evacuated the Buddhist center but members of the fire crew stayed. Other firefighting monks joined them from the San Francisco Zen Center and the Green Gulch Farm Zen Center, a third monastery in the Marin County mountains.

The group of firefighting monks was created after a 2008 blaze reached the Tassajara monastery and a dozen stayed behind to defend it. They got their name from a book titled “Fire Monks” about those who stayed to fight that blaze, Migliogli said.

The monks train every year with professional firefighters and reside in the three monasteries. They travel to centers where they are needed, he said.

Despite all the work, they are still meditating every morning and holding service, Migliogli said.

On the eastern flank of the Sierra Nevada, the Inyo Creek Fire in the Whitney Portal area near the town of Lone Pine thwarted hikers planning to climb Mount Whitney, the tallest peak in the contiguous United States.

Hikers were unable to begin treks at Whitney Portal and rangers were in the wilderness to divert returning hikers to other longer egress trails. Hikers were still being evacuated Tuesday evening, fire officials said.

The fires were among dozens that have scorched large swaths of the West, including in Arizona, Utah and Colorado.

A lightning-caused wildfire crept closer Tuesday to Flagstaff in northern Arizona, threatening to force people from their homes. The mountain city has nearly 80,000 residents, a state university and an observatory where Pluto was discovered.

Evacuations were in place because of several other wildfires across Arizona, affecting mostly rural residents and campers, and many local roads were closed. Half of the national forests in Arizona will to close entirely to the public because of wildfire danger and limited resources, authorities said.