Another body was discovered in the rubble of the Champlain Towers condo building collapse, bringing the official death toll to 10.

That leaves 151 souls still unaccounted for on Day Five of the massive search-and-rescue effort that has drawn international help and speculation as to what caused the sudden collapse of an occupied 12-story condominium in the dead of night.

On Sunday, families got their first look at the rescue effort in person. They shouted the names of their loved ones, their desperate cries momentarily breaking the solemn silence of the search.

Officials did not yet identify the latest person recovered because they are still in the process of reaching out to the next of kin.

Developers of doomed Fla. tower were once accused of paying off officials: report 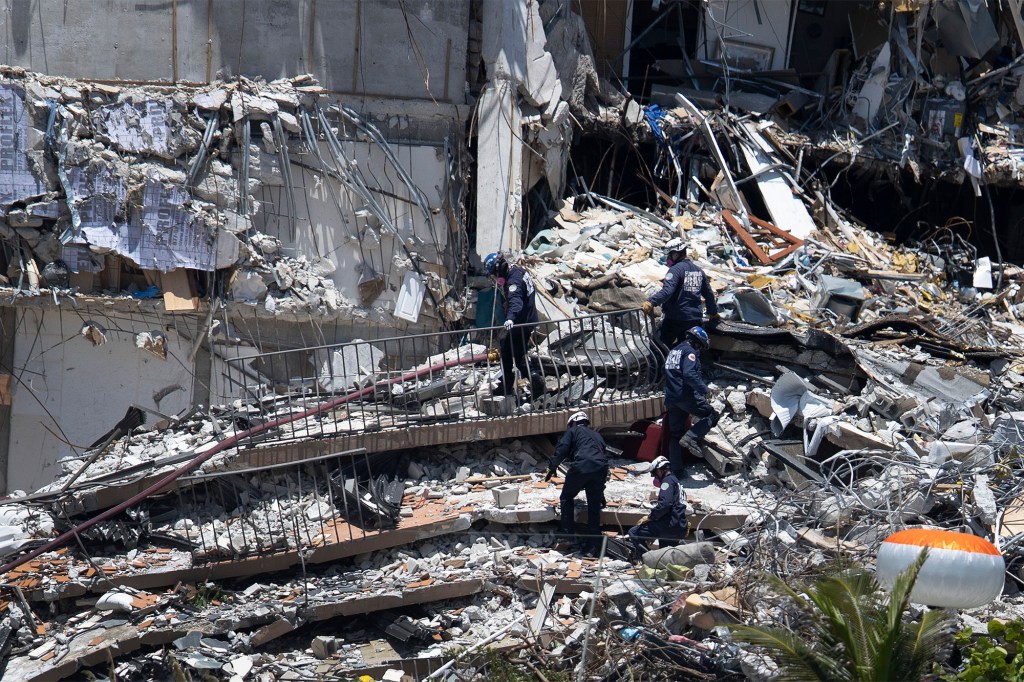 The developers of the Miami condo tower that collapsed were once accused of paying off local officials to get permits for the site — which needed $15 million in repairs just to bring it to code, a new report says.

Building rivals claimed that the partners behind Surfside Champlain Towers South were receiving preferential treatment when it came to getting through the permit system as the site was being built in 1981, the Washington Post said.

Surfside’s developers had contributed to the campaigns of at least two town council members, then demanded that the donations be returned when the allegations surfaced, according to the outlet.

Meanwhile, the 12-story tower had been on the verge of undergoing $15 million in renovations to pass a required 40-year certification when it collapsed Thursday, killing at least nine people and leaving more than 150 unaccounted for, the report added.

All of the principals believed to have been involved in the design and construction of the building are already dead, the outlet said.

SURFSIDE, Fla. — Surfside officials worried about the potential for new disasters ordered inspections of buildings near the collapsed Champlain Towers South on Saturday, as fires at the disaster site smoldered and hopes of finding survivors faded.

Rescue workers, armed with sonar and cameras, found three more sets of remains, bringing the total to five people dead and 156 others missing inside a haphazard heap of concrete and steel rebar. Officials warned that picking apart the heavy sandwiched apartments was a delicate and dangerous task and that progress would be slow.

Officials said DNA samples collected from relatives of the missing would help in the speedy identification of those found.

Authorities said the couple, who lived on the ninth floor, were found together in the rubble, according to Antonio Lozano’s nephew, Phil Ferro.