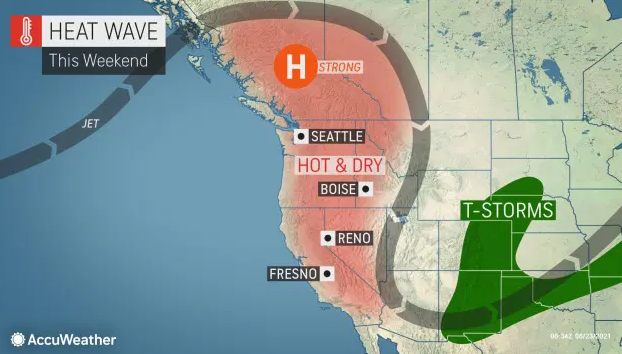 Excessive heat watches and red flag warnings were in effect across the northwestern United States Wednesday as record heat began building in some places and AccuWeather forecasters along with local officials are warning that the weather is going to become a lot hotter in the coming days.

“We’re going to be looking at all-time record highs in some spots,” AccuWeather Chief Broadcast Meteorologist Bernie Rayno warned for a part of the country where air conditioning is not a staple in homes. Rayno said some of the places that will see temps soar farthest above normal include those along the Interstate-5 corridor between Seattle and Portland.

It is not just the northwestern U.S. where all-time record highs may be set. There is the potential for a new Canada high temperature mark to be set with the heat wave this weekend to early next week. That temperature is 113 F or 45 C and was set on July 5, 1937, at Midale and Yellow Grass, Saskatchewan.