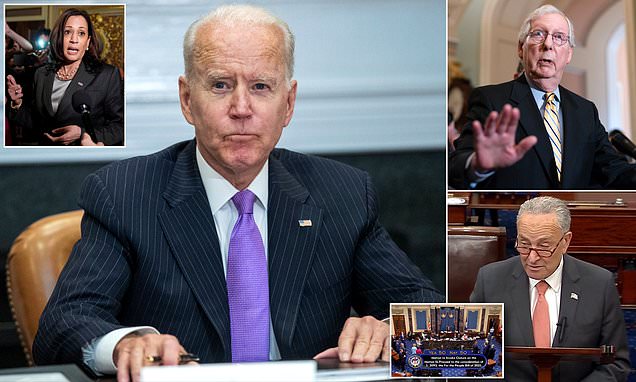 Joe Biden (top) on Tuesday night accused Republicans of ‘the suppression of a bill to end voter suppression’ after a Senate test vote to debate voting rights legislation failed. All 50 Democrats voted in favor, including key swings Sens. Joe Manchin and Kyrsten Sinema. And all 50 Republicans voted against beginning debate on a revised ‘For the People Act.’ Senate Minority Leader Mitch McConnell (bottom right) criticized the proposal, calling it a ‘transparently partisan’ effort that shows the left’s ‘disdain’ for Americans. Kamala Harris (inset) insisted that the fight was not over, and Senate Majority Leader Chuck Schumer (bottom left) accused Republicans of having ‘poisoned our democracy’. ‘A Democratic stand to protect our democracy met a solid Republican wall of opposition,’ Biden said. ‘Senate Republicans opposed even a debate — even considering — legislation to protect the right to vote and our democracy.’