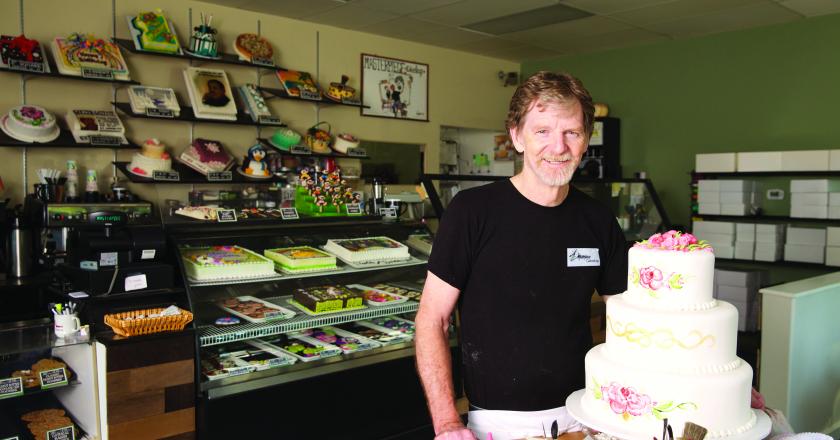 As the “woke” crowd has insisted everyone accept the new politically correct morality, it has sometimes run roughshod over Christians insisting they have to stick with biblical morality. Colorado baker Jack Phillips was doing that when he told two gay men he couldn’t bake a cake to celebrate their same-sex marriage because his conscience wouldn’t allow it.

The fight over that cake went all the way up to the U.S. Supreme Court, where Phillips won, but his legal battles are still not over. Now he has a new book out – The Cost of My Faith: How a Decision in My Cake Shop Took Me to the Supreme Court. It calls on people of faith to stand up for their beliefs, even when the government says that’s a crime.

Phillips explained to CBN News in a little more depth why he couldn’t design and bake a cake for two men celebrating their marriage.

“The Bible is pretty clear that God made male and female and He joined them together in marriage,” Phillips said. “And marriage was His design, His idea. I’m not smart enough to do anything like that. And He created it unique and special between a man and a woman and any other view of that would go against biblical principles.”

Not About Discrimination or Homophobia

Phillips insisted his refusal wasn’t about discrimination or homophobia. From the beginning, Phillips and his wife agreed there were many designs and orders they would not fulfill because of their faith and conscience.

He recalled, “Among them would be cakes to celebrate Halloween, cakes that had alcohol in them, cakes that would denigrate other people or belittle them, including people that identify as LGBT.”

As for denigrating, Phillips takes issue with the labels and accusations thrown at him by the Colorado Civil Rights Commission as it ruled his freedom of religion provided no right to refuse baking the cake in question.

He still sounded upset as he said, “One of the commissioners said that religious freedom was ‘a despicable piece of rhetoric’ and that it’s been used for different things like slavery and the Holocaust. And to compare not creating a cake that celebrates a marriage that I couldn’t do…comparing that to the Holocaust and slavery were particularly offensive.”

He continued, “Especially the Holocaust part, because my dad served in World War Two. He landed at Normandy, and he fought through the Battle of the Bulge. And he was part of the group that helped free Buchenwald Concentration Camp. And he saw the horrors. I’ve looked up Buchenwald and seen the horrors of that, and to be compared to the Nazis and those concentration camps for not creating a cake that celebrates this marriage was particularly offensive to me.”

The commission ordered Phillips to either bake the gay wedding cake or stop making wedding cakes altogether, something that would kill about 40 percent of his business. It also ruled his staff go through mandatory re-education to teach them the baker was wrong. Phillips, however, refused to surrender, realizing his decision to fight for his business, faith, and conscience could affect all Americans.

“This has been so much more than just ‘can Jack go back to making cakes again?’ or anything like that,” Phillips asserted. “It’s sort of ‘every American has the right to live and work according to their conscience without fear of punishment, especially punishment from the government in this way.'”

Jon Scruggs of Alliance Defending Freedom was one of the lawyers fighting for Phillips, and he said of the baker, “His case was really important, right? It was about the freedom of all Americans to control what they say and about the messages they believe in.”