JERUSALEM (AP) — Hamas militants fired dozens of rockets into Israel on Monday, including a barrage that set off air raid sirens as far away as Jerusalem, after hundreds of Palestinians were hurt in clashes with Israeli police at a flashpoint religious site in the contested holy city.

The early evening attack on Jerusalem drastically escalated the already heightened tensions throughout the region following weeks of confrontations between Israeli police and Palestinian protesters that have threatened to become a wider conflict.

The Israeli military responded with airstrikes in Gaza that killed at least one person, and officials warned of an open-ended operation against the territory’s Hamas militant rulers.

“We see this as a very severe attack on Israel, an attack that will not go unanswered,” said Lt. Col. Jonathan Conricus, a military spokesman. “Hamas bears full responsibility,” he added, saying Israel planned to deliver a ”severe blow.”

Conricus said a total of 50 rockets were fired into Israel, including six that were aimed at Jerusalem, some 100 kilometers (60 miles) away. It was believed to be the first rocket attack on the city since a 2014 war.

Shortly after the sirens sounded, explosions could be heard in Jerusalem. One rocket fell on the western outskirts of the city, lightly damaging a home and causing a brush fire. The Israeli army said one rocket was intercepted and the others fell in open areas. Rocket fire on southern Israel continued throughout the evening.

The Israeli army said an Israeli civilian in the country’s south suffered mild injuries when a vehicle was struck by an anti-tank missile from Gaza.

Abu Obeida, spokesman for Hamas’ military wing, said the attack on Jerusalem was a response to what he called Israeli “crimes and aggression” in the city. “This is a message the enemy has to understand well,” he said.

He threatened more attacks if Israeli forces re-enter the sacred Al-Aqsa Mosque compound or carry out planned evictions of Palestinian families from an east Jerusalem neighborhood.

Earlier, Israeli police firing tear gas, stun grenades and rubber bullets clashed with stone-throwing Palestinians at the iconic compound, which is Islam’s third-holiest site and considered Judaism’s holiest. Tensions at the site have been the trigger for prolonged bouts of violence in the past, including the last Palestinian intifada, or uprising. It was not clear if the current unrest would escalate or dissipate in the coming days.

More than a dozen tear gas canisters and stun grenades landed in the mosque as police and protesters faced off inside the walled compound that surrounds it, said an Associated Press photographer at the scene. Smoke rose in front of the mosque and the golden-domed shrine on the site, and rocks littered the nearby plaza. Inside one area of the compound, shoes and debris lay scattered over ornate carpets.

In an apparent attempt to avoid further confrontation, Israeli authorities changed the planned route of a march by ultra-nationalist Jews through the Muslim Quarter of the Old City to mark Jerusalem Day, which celebrates Israel’s capture of east Jerusalem.

Monday’s confrontation was the latest after weeks of almost nightly clashes between Palestinians and Israeli troops in the Old City of Jerusalem, the emotional center of their conflict, during the Muslim holy month of Ramadan. The month tends to be a time of heightened religious sensitivities.

Most recently, the tensions have been fueled by the planned eviction of dozens of Palestinians from the Sheikh Jarrah neighborhood of east Jerusalem, where Israeli settlers have waged a lengthy legal battle to take over properties.

Over the past few days, hundreds of Palestinians and several dozen police officers have been hurt in clashes in and around the Old City, including the sacred compound, which is known to Jews as the Temple Mount and to Muslims as the Noble Sanctuary.

The tensions in Jerusalem have threatened to reverberate throughout the region and come at a crucial point in Israel’s political crisis after longtime leader Prime Minister Benjamin Netanyahu failed to form a governing coalition last week. His opponents are now working to build an alternate government.

Before Monday’s rocket attack on Jerusalem, Palestinian militants had fired several barrages of rockets into southern Israel. Protesters allied with Hamas have launched dozens of incendiary balloons into Israel, setting off fires across the southern part of the country.

The rare strike on Jerusalem came moments after Hamas had set a deadline for Israel to remove its forces from the mosque compound and Sheikh Jarrah and release Palestinians detained in the latest clashes.

Hamas, an Islamic militant group that seeks Israel’s destruction, has fought three wars with Israel since it seized power in Gaza in 2007. The group possesses a vast arsenal of missiles and rockets capable of striking virtually anywhere in Israel.

Israel’s actions in Jerusalem have come under growing international criticism.

The rocket strike on Jerusalem was a significant escalation and raised the likelihood of a tough Israeli response. Israel’s response thus far has come under growing international criticism.

The U.N. Security Council scheduled closed consultations on the situation Monday. The United States and European Union have expressed deep concern over the unrest in Jerusalem, urging Israel to calm the situation and not carry out the planned evictions. Arab allies of Israel, along with Turkey, also have condemned Israel’s actions.

Prime Minister Netanyahu pushed back against the criticism Monday, saying Israel is determined to ensure the rights of worship for all and that this “requires from time to time stand up and stand strong as Israeli police and our security forces are doing now.”

The day began with police announcing that Jews would be barred from visiting the holy site on Jerusalem Day, which is marked with a flag-waving parade through the Old City that is widely perceived by Palestinians as a provocative display in the contested city.

Just as the parade was about to begin, police said they were altering the route at the instruction of political leaders. Several thousand people, many of them from Jewish settlements in the West Bank, were participating.

In the 1967 Mideast war in which Israel captured east Jerusalem, it also took the West Bank and Gaza Strip. It later annexed east Jerusalem and considers the entire city its capital. The Palestinians seek all three areas for a future state, with east Jerusalem as their capital. 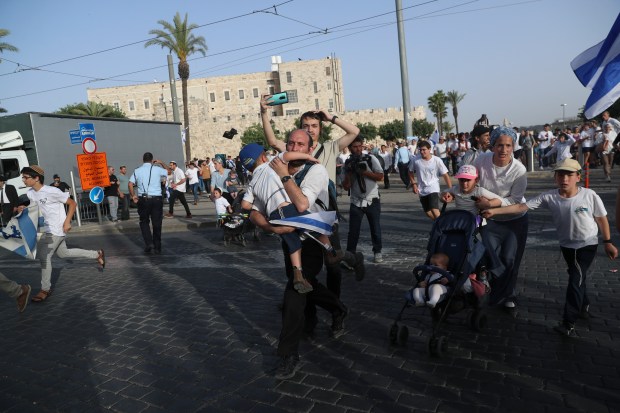 HAMAS has fired seven rockets at Jerusalem over Israel’s “crimes and aggression” after a holy mosque was stormed by cops, reports say.

The blast came moments after the Islamic extremists issued an ultimatum for Israel to withdraw security forces from two areas in the city.

Hamas militants in the Gaza Strip fired rockets toward Jerusalem, setting off air raid sirens throughout the city, with at least one person injured.

Shortly after the sirens sounded, explosions could be heard in the area.

The Israeli Army said there was an initial burst of seven anti-tank missiles, one of which was intercepted, and rocket fire was continuing.

Abu Obeida, spokesman for Hamas military wing, said the attack was a response to what he called Israeli “crimes and aggression” in Jerusalem after cops raided a mosque with tear gas and rubber bullets.

“This is a message the enemy has to understand well”, he said.

He threatened more attacks if Israel again invades the sacred Al-Aqsa compound or carries out evictions of Palestinian families in a neighborhood of east Jerusalem.

The blast came as thousands of Israelis joined a “Flag March” today, which is called “Jerusalem Day” – an Israeli national holiday that celebrates the establishment of control over the Old City.

The Israeli military responded with airstrikes in the Gaza Strip, with one appearing to target a senior Hamas military commander.

Israel Defense Force’s spokesman Jonathan Conricus said the military had a “green light” to hit targets until Hamas “gets the message and learns its lesson.” 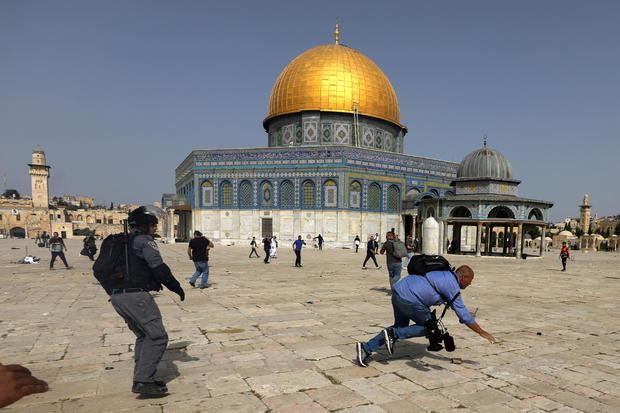 Israel’s army said it launched air strikes on Gaza Monday, in response to rockets fired by Hamas militants, after hundreds of Palestinians were hurt in clashes with Israeli police at a religious site in Jerusalem.

Israeli army spokesman Jonathan Conricus told reporters that Israeli forces had targeted “a Hamas military operative,” while Hamas sources in Gaza confirmed to AFP that one of their commanders had been killed.

Confrontations between Israeli security forces and protesters have been escalating for weeks. The clashes started at the beginning of Ramadan, almost a month ago, when Israeli police put up barriers to stop people sitting in the Damascus Gate plaza, a popular gathering area during Ramadan. Young Palestinians protested what they saw as Israeli authorities disrupting their religious and social traditions.

Then on April 16, the first Friday of Ramadan, tensions escalated further when Israel imposed a 10,000-person limit on prayers at the al-Aqsa Mosque. Tens of thousands of Palestinians were turned away.

Meanwhile, there had been demonstrations over another simmering dispute: An Israeli plan to evict several Palestinian families from their homes in the Sheikh Jarrah neighbourhood in East Jerusalem, to allow Jewish settlers to move in.

The unrest erupted into serious violence over the weekend, and it got worse on Monday. The Palestinian Red Crescent said 331 Palestinians were injured in a crackdown on worshipers at al-Aqsa mosque on Monday alone. Seven people were left in critical condition, according to the medical group.

The Israel Defense Forces releases footage of its strike on three Hamas members who it says were launching rockets toward Israel.