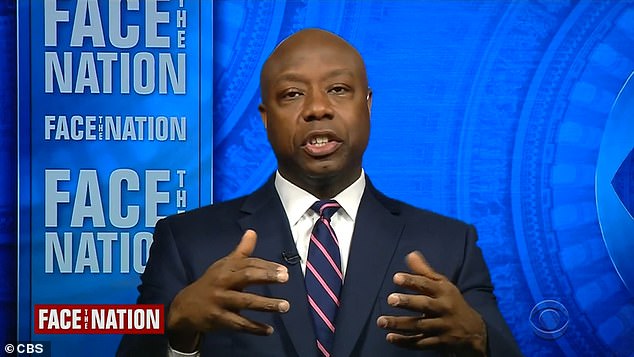 Senator Tim Scott has praised President Joe Biden and Vice President Kamala Harris for agreeing with him that America is ‘not a racist country,’ after critics attacked Scott with racial slurs over his rebuttal to Biden’s joint address to Congress.

Scott, a South Carolina Republican, told CBS’ Face The Nation on Sunday that he stood by his assessment that America is not racist, despite being pulled over 18 times for ‘driving while black.’

‘Let me say thank goodness that finally our president, our vice president and one of the leaders in the Democrat- Democrat caucus in the House, Jim Clyburn, have all come forward and said exactly what I’ve been saying for a long time. America is not a racist country,’ Scott said in the interview.

‘The question is, is there a lingering effect after a couple of centuries of racism and discrimination in this nation? The answer is absolutely,’ he added.