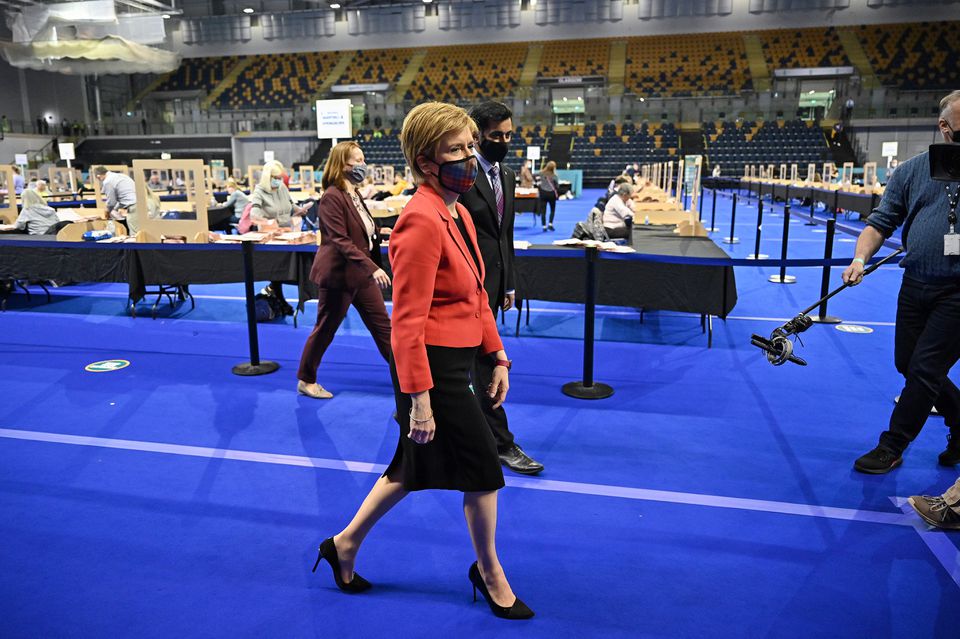 Scotland’s First Minister Nicola Sturgeon vowed on Saturday to press ahead with plans for a new referendum on leaving the United Kingdom after saying there was no doubt elections to the Scottish parliament would return a pro-independence majority.

In a rebuke to British Prime Minister Boris Johnson who has said he would block a secession vote, Sturgeon said it would be absurd for any politician in London to try to block a vote.

“The only people who can decide the future of Scotland are the Scottish people, and no Westminster politician can or should stand in the way of that,” Sturgeon told BBC TV.

Results on Saturday showed Sturgeon’s Scottish National Party (SNP) well on course for a fourth consecutive term in office having triumphed in 62 of the 86 seats so far declared for the 129-seat parliament.

However, the electoral system – which allocates 56 seats on a proportional representation basis that helps smaller parties – means it was highly unlikely to obtain an overall majority, falling one or two seats short.

The Scottish Greens, who also support independence, were expected to win more than half a dozen seats.

“It looks as if it is beyond any doubt that there will be a pro-independence majority in that Scottish parliament,” Sturgeon said. “By any normal standard of democracy that majority should have the commitment it made to the people of Scotland honoured.”

Johnson, who the British government says must approve a referendum for it to be legal, has repeatedly indicated he will not allow one, pointing out Scots backed staying in the United Kingdom in a “once in a generation” poll in 2014.

The sets the scene for a bitter clash between the Scottish government in Edinburgh and Johnson’s United Kingdom-wide administration in London, which could ultimately lead to the end Scotland’s 314-year union with England and Wales.

The nationalists argue that they have democratic authority on their side; the British government say the law is with them. It is likely the final decision on a referendum will be settled by the courts.

Scots voted to remain part of the United Kingdom by 55% to 45% in 2014. Polls suggest the outcome of a second referendum would be too tight to call.

Supporters of the union argue that without an SNP majority, there is no mandate for a referendum, while Johnson has said it is wrong to focus on independence rather than the recovery from the COVID-19 pandemic.

“I think a referendum in the current context is irresponsible and reckless,” he told the Daily Telegraph newspaper.

Scottish politics has been diverging from other parts of the United Kingdom for some time, but Scots remain split over holding another vote on whether to end their country’s 314-year union with England and Wales.

Britain’s exit from the EU – opposed by a majority of Scots – as well as a perception that Sturgeon’s government has handled the COVID-19 crisis well, and antipathy to Johnson’s Conservative government in London, have bolstered support for Scotland’s independence movement.

Sturgeon, who has said she will only hold a referendum after the coronavirus pandemic is over,has ruled out holding an illegal or wildcat plebiscite. She said it would be for the UK government to mount a legal challenge to block the vote.

“If Boris Johnson or whoever is Prime Minister at the time, has any respect for Scottish democracy, they will come together with the Scottish Government as happened in the run up to 2014 and agree (to allow a referendum),” said Sturgeon, adding it would be for the UK government to make a legal challenge.

“The absurdity and outrageous nature of a Westminster Government, potentially going to court to overturn Scottish democracy, I can’t think of a more colourful argument for Scottish independence than that myself,” she said.