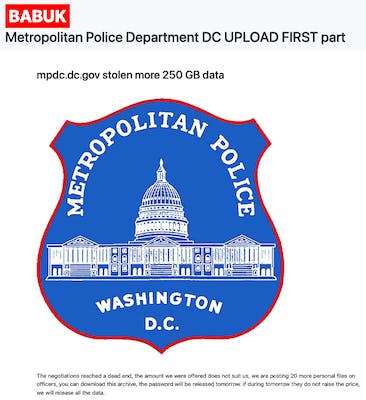 A group of cybercriminals have begun leaking what it claims to be internal law enforcement files after Washington, D.C.’s Metropolitan Police Department was targeted with ransomware last month.

In a post on the dark web Tuesday, the Babuk ransomware gang alleged that negotiations had “reached a dead end” after declining a payment offer made by police.

The post includes a download link for what the group says is around 20 personnel files on officers as well as screenshots of the data.

The group followed up with a second post on Tuesday which included screenshots of what were alleged to be the negotiations with officers, spanning from late April to this past Monday, alongside a message stating: “You still have the ability to stop it.”