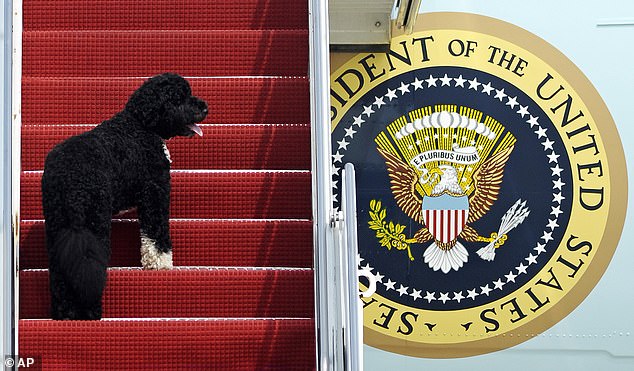 The Obamas have bid a sad farewell to their family pet Bo who passed away Saturday from cancer.

The Portuguese Water Dog, a gift from the late Sen. Ted Kennedy, a key supporter of Obama’s 2008 presidential campaign who became close to the family.

The dog was adopted by the First Family early in 2009 and joined them for both terms in the White House.

Bo helped Obama keep a promise to daughters Malia and Sasha that they could get a dog after winning the election in 2008.

On Saturday, the former president posted a series of pictures of his pet alongside a moving message describing Bo as a ‘true friend and loyal companion.’

‘Today our family lost a true friend and loyal companion. For more than a decade, Bo was a constant, gentle presence in our lives—happy to see us on our good days, our bad days, and everyday in between.

‘He tolerated all the fuss that came with being in the White House, had a big bark but no bite, loved to jump in the pool in the summer, was unflappable with children, lived for scraps around the dinner table, and had great hair.

‘He was exactly what we needed and more than we ever expected. We will miss him dearly.’