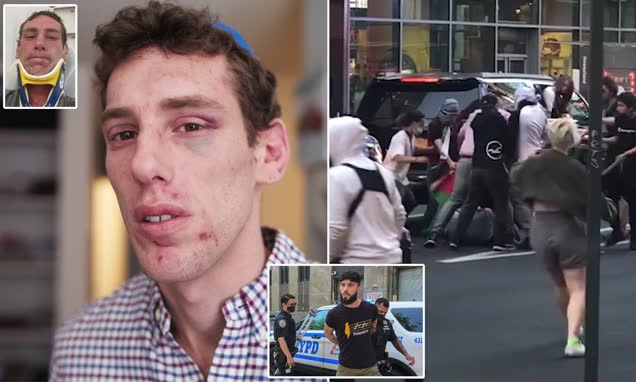 Joseph Borgen, 29, an accountant who lives on the Upper East Side, said he was wearing a grey kippa and walking toward a pro-Israel rally in Times Square Thursday when a gang of pro-Palestinian demonstrators attacked him on the street. ‘I turned around to try to figure out what was going on and the next thing I knew I was surrounded by a whole crowd of people who proceeded to physically attack me, beat me, kick me, punch me, hit me with crutches, hit me with flag poles,’ he told DailyMail.com Friday afternoon from his apartment after being released from Bellevue Hospital. Video (right) of the assault showed Borgen was left defenseless as he was kicked, punched, and beaten with crutches and flag poles by a mob of eight to 10 people. Borgen recalled hearing them shout, ‘You filthy Jew’, ‘We’re going to f*****g kill you’, ‘Go back to Israel’ and ‘Hamas is going to kill you,’ as he lay on the ground. The NYPD on Friday identified 23-year-old Waseem Awawdeh (center) as the suspect who is seen using a crutch to beat Borgen. He has been charged with hate crimes.