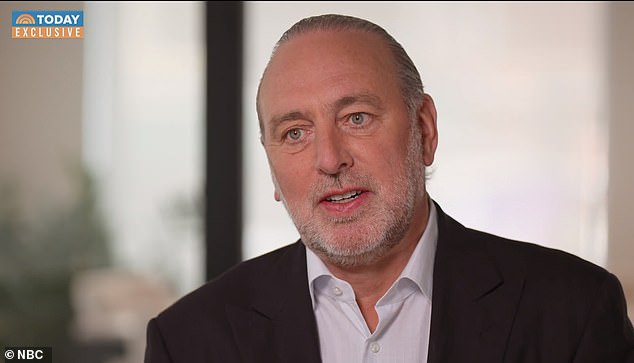 Hillsong founder Brian Houston said cheating pastor Carl Lentz was ‘narcissistic’ but admits he created a culture in the church where there is ‘one rule for celebrities’ and one for everyone else.

Houston spoke to Savannah Guthrie for the Today show on Wednesday in his first interview since a wave of scandals hit the celebrity-adored megachurch.

Among them are Carl’s affair with a Brooklyn woman and a series of claims from former staffers and parishioners that the church fostered an environment where they were bullied and exploited.

Houston said on Wednesday that he feels ‘a lot of disappointment’ over the series of scandals, but that he ultimately believes Hillsong is a ‘good church’.

“I'm acknowledging that mistakes have been made.”

‘Carl was Carl. He’s a unique character. There’s a lot of things I miss about Carl. But having said that, there were leadership issues that I believe included lying, included what I would call narcissistic behavior.

‘I’ve had concerns and many conversations over the years with Carl.

‘I think there’s a lot of things I should’ve known earlier, and hopefully, moving forward, we’ll make sure we have far better systems in place and better accountability,’ he said.

He maintains he was not grooming Lentz to take a senior position in the church, and says he does not agree with claims that the two are alike.

‘On one level, if people say Carl was like me, I’d see it as a compliment because (he’s an) incredibly gifted guy, but on another level, I don’t think Carl really is anything like me.

Asked by Guthrie what he thinks Jesus Christ would have thought of it, he said: ‘Do you want the honest answer? I think he would like it. We’re focused on glorifying him.’

He added: ‘I’m not sure a church can be too big. I just think we have to grow into ourselves’

Lentz, who is married with children, was the church’s most famous pastor. He had a celebrity persona that involved him being chauffered to services and being held in a green room before emerging on stage to carry out the type of trendy sermon the church is famous for.

His affair with Ranin Karim emerged in November last year. He has since left his role in the church.