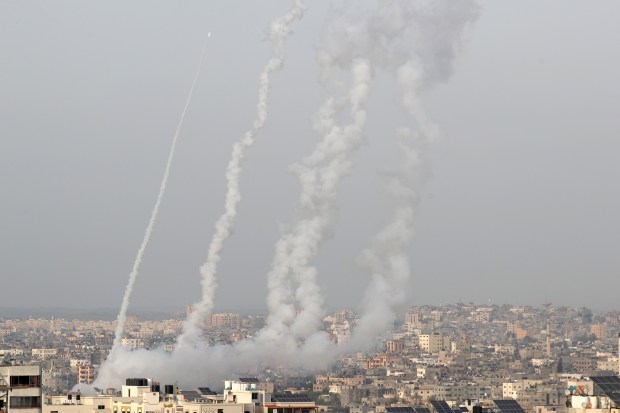 HAMAS has fired seven rockets at Jerusalem over Israel’s “crimes and aggression” after a holy mosque was stormed by cops, reports say.

The blast came moments after the Islamic extremists issued an ultimatum for Israel to withdraw security forces from two areas in the city.

Hamas militants in the Gaza Strip fired rockets toward Jerusalem, setting off air raid sirens throughout the city, with at least one person injured.

Shortly after the sirens sounded, explosions could be heard in the area.

The Israeli Army said there was an initial burst of seven anti-tank missiles, one of which was intercepted, and rocket fire was continuing.

Abu Obeida, spokesman for Hamas military wing, said the attack was a response to what he called Israeli “crimes and aggression” in Jerusalem after cops raided a mosque with tear gas and rubber bullets.

“This is a message the enemy has to understand well”, he said.

He threatened more attacks if Israel again invades the sacred Al-Aqsa compound or carries out evictions of Palestinian families in a neighborhood of east Jerusalem.

The Israeli military responded with airstrikes in the Gaza Strip, with one appearing to target a senior Hamas military commander.

Israel Defense Force’s spokesman Jonathan Conricus said the military had a “green light” to hit targets until Hamas “gets the message and learns its lesson.”